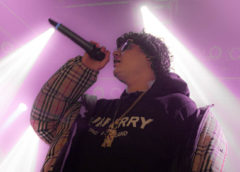 Los Angeles rap group Shoreline Mafia brought their boisterous sound to Chicago for the Paid In Full tour. The sold out show was held at the House of Blues where fans lit up the venue and sung word for word as Ohgeesy and Fenix performed favorites such as Whuss the deal, Bottle service, Bands and Musty. The groups performance energized the crowd as they interacted with the fans, and got deeper into the set list. The group also payed homage to native Chicago rapper Chief keef as ohgeesy got in the crowd and had his Dj play his banger “Earned it”. They performed new songs off their mixtape “Party Pack.Vol 2” before they closed out the show with hit “Nun Major”. The show is one to remember, live the moment through our lens from the Paid In Full tour.