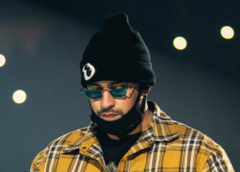 Bad Bunny ignited the Allstate Arena in Chicago, IL with his sold out X100Pre Tour on Friday night. The entire Arena went dark as the screen above the stage started and the bracelets distributed to concert goers activated. The Puerto Rican singer who recently won his first Grammy took the stage to perform “Ni Bien, Ni Mal” the first track off his award winning album. The 360 stage made the show an experience like no other, which each song having its own visuals. The stage set the mood with upbeat vibrant visuals for hits like “Otra Noche en Miami” “Caro” and “krippy Kush” While displaying subtle, calm ones for songs like “Amorfoda” “Solo de Mi” and fan favorite “La Cancion”. The crowd was roaring along with an ecstatic Bad Bunny as he went on to close out the show performing new charting hit “vete” for the first time ever. There is no denying 2019 was his, and 2020 isn’t looking any different. Live the X100PRE experience through our lense.