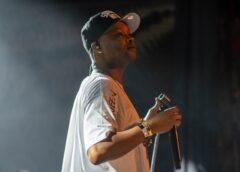 Grammy nominated BJ The Chicago made his way to Chicago to end the 1123 Tour. For the Chicago artist this hometown show meant a lot to fans that have supported him throughout the years. As a special treat he brought with him Ro James, Luke James and a small marching band. Swagga DJ AJ played a set early to get the crowd energized before BJ took the stage.

BJ The Chicago was greeted by a screaming full house at the House of Blues where fans could hear all of their favorite song. Accompanied by a 2 piece band with keys and drums BJ kicked of his set with Turnin Me Up. His stage presence was a force to be reckoned with as he hyped the crowd as he began to sing Church. This song will always be a crowd pleaser as the lyrics hit home for a lot of fans that grew up in church, but still has another side to them. After performing a number of songs BJ left the stage for wardrobe changes while Luke James and Ro James took over to perform some of their songs. Everytime BJ came to stage he took things up a notch running through songs Time Today, Resume, Close and Roses. Performing for over an hour the crowd never lost it’s nostalgia. BJ took time to thank fans for supporting him throughout the years. He’s always been personable and it shows in his music. We look forward to seeing what is in store for next year as he continues to elevate.