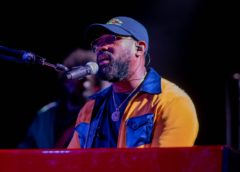 PJ Morton “PAUL” tour makes its way to Chicago for a night of music and love. The Grammy Award singer, songwriter and musician latest project “PAUL” has garnered major accolodates. Chicago turned out in record numbers to sell out Concord Music Hall to see PJ Morton accompanied by a full band and background singers.

To get the night going PJ had labelmate Brik.Liam who set the tone for the night. Brik is no stranger as he was recently featured on the More Gumbo Tour last year. His set included songs from his latest project What’s The Matter, Brik? and his take on some R&B classics. It’s safe to say that Brik.Liam has great vocal ability that compliments his lyrical content. Next up the Grammy Nominated Asiahn took the stage. Asiahn got her musical start for her writing ability for other artist such as Drake, J Lo and Lil Wayne just to name a few. Tonight we experienced her pen game live as she performed songs from her album Love Train 2. We look forward to hearing more from Brik.Liam and Asiahn.

PJ Morton came to stage and the entire sold out crowd erupted. Accompanied by a full band and background singers. PJ began the night with songs like Ready, Don’t Break My Heart and Say So. Seated behind his custom made piano case and fender rhodes, PJ proceeded to take us on a musical journey. PJ Morton’s songs carries honesty, passion and love that will never go unnoticed. His catalog of music strikes a chord with everyone inside the venue tonight. Couples sang, danced and laughed together as PJ dove into his catalog of music. It’s safe to say that Chicago loves PJ Morton and his music. Be sure to go stream and purchase his latest project.