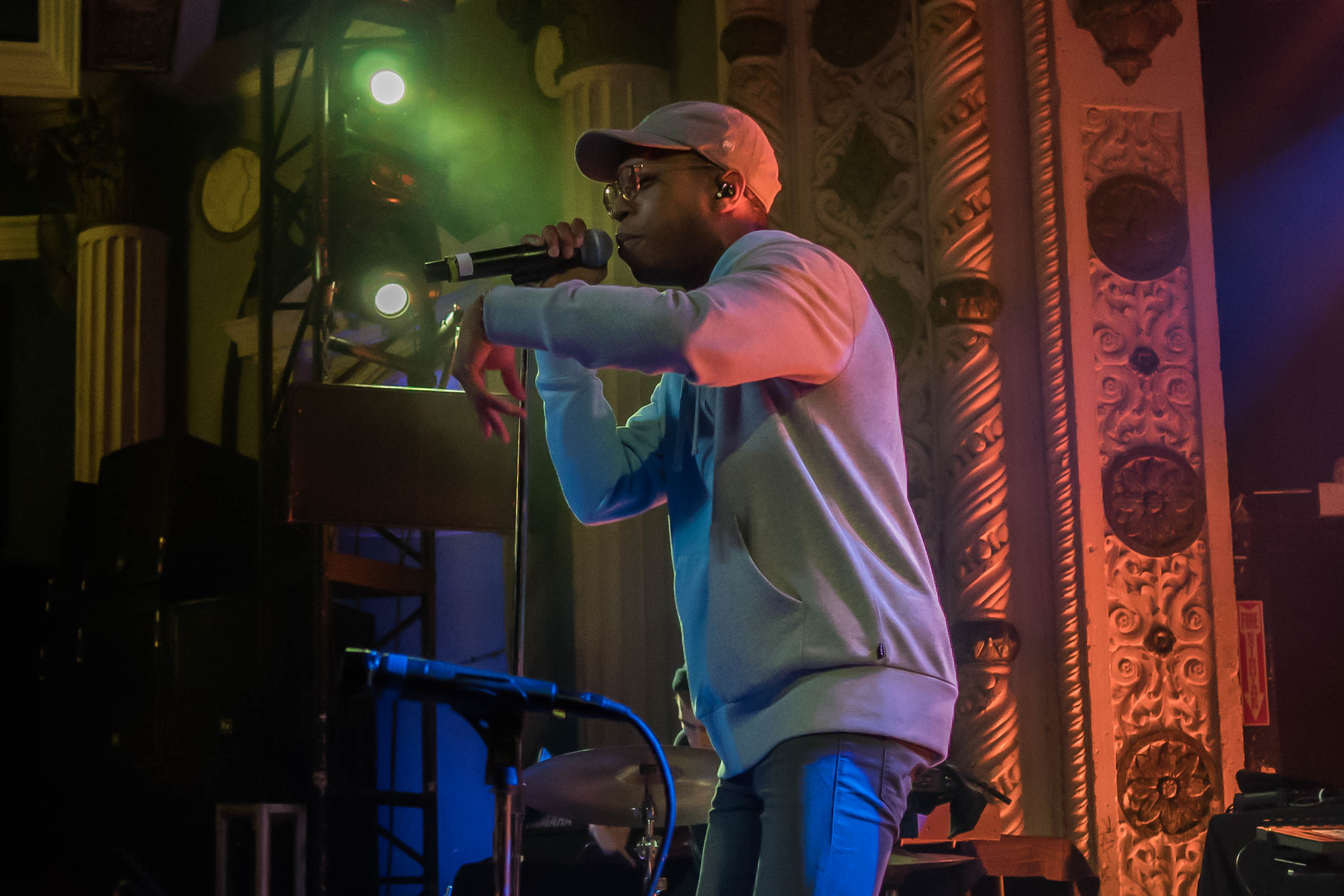 A frequent guest vocalist on an eclectic array of songs (Big Gigantic, Aluna George and more) Pell is one of those artists you might’ve already heard without even knowing.  If you’ve seen La La Land, you’ve heard a snippet of his track in the opening scene.  He’s currently a featured artist with Red Bull with an upcoming concert date supporting Aminé and he’s set to release an EP soon.

We caught up with Pell between tour dates to talk about his upcoming release, his musical influences, and his career highlight to date.  Don’t miss Pell’s return to the Metro with Aminé and A2 on November 18th!

CB: What are you working on right now?  I heard that you have an album coming out.

CB: Where do you find inspiration for your music?  What is your creative process like?

Pell:  Creative process is really just an ever going process.  It doesn’t really start or stop.  I think it’s like it comes at a moment’s notice, so it’s really whenever I’m inspired maybe I write something, maybe I go on my laptop.  It’s truly everywhere.  There’s no one way I can create.  I feel like if I get into a routine when I’m creating, it’ll feel like I’m making the same thing over and over again.

CB: What does your typical day look like?  I don’t think I saw that you were on tour at least for another week or two, so what are you up to now?

Pell:  I’m not back at it until next weekend.  So, my usual day is get up.  I just  recently bought a guitar, so I’m trying to teach myself how to play that and then I’ll go back to doing emails for most of the day, like with brands and other partnerships that I have and then at the end of the day, I go to the studio for 8 hours and crank out a song.

CB: So it sounds like a pretty long day actually.  It’s almost like you have several jobs all at once.

Pell:  It doesn’t feel like a job when it’s your passion, so they say.  It’s good.

CB: What’s it been like working with Red Bull.  You’re going to be here next month, almost exactly a month from now on the Red Bull 30 Days in Chicago.  How’s that been going?

Pell:  Oh, that’s going to be awesome.  I’m really excited about the fact that Chicago was the first stop that I made on my tour last year, my first headlining tour.  We did it at Reggie’s and I love uh, I think we’re at what’s it called?  I can’t think of it right now–

CB: Growing up in New Orleans, how do you feel like that influenced your sound and your career?

CB: Do you have any musical influences?  Maybe some of the top ones that you can think of?

Pell:  My main music influence would probably be — are you talking about from New Orleans?

CB: From New Orleans or maybe even broader, broadly speaking, from anywhere.

Pell:  From New Orleans, definitely Lil Wayne.  That goes without saying, but I’ll definitely say.  Two, I’d say Curren$y just because of the whole independent route, you know with him being an independent artist for the majority of his career and like paving a way where there wasn’t one.  I thought that that was really unique and definitely we learned a lot from him.  You know like people in my generation of artists from New Orleans are just in general, like rap artists, so he’s definitelty one as well.  On a more broader sense, I feel like Kanye, Lupe Fiasco, actually a lot of Chicago influences.  Consequence, John Legend, and other than that, I feel like I just pull from a bunch of different genres, but those would be my main influences.

CB: I noticed on one of your older tracks, you sampled Tycho.  Are there any other interesting samples in your repertoire, that you find interesting or that you think that your fans might?

Pell:  Yeah, once I sampled this group called Alpines.  They made this song called “Hand” that’s really really tight.  Anybody who listens to me should definitely check that out.  Another time–I don’t sample often, so I think that’s the main sample that I have to call back on.  The song that I sampled it–the song that used the sample isn’t even out anymore.  I pulled it from the internet.  It was low-key trash, but I really liked Alpine, so I wanted to incorporate that.  But, I like Kings of Leon.  I like Vampire Weekend.  I like Fleet Foxes.  As of late, I like Kacy Hill a lot.  I like Noname.  I like Tank and the Bangas.  That’s what I’ve been listening to.

Pell:  Yeah, actually one of the first people I collaborated with outside of my immediate circle Dave Sitek, he definitely challenged my creative boundaries to kind of you know, listen to the music instead of like see it.  I think a lot of times in hip hop especially, when you get into a creative space, everyone is looking at the computer, you know what I mean, instead of playing instruments and that’s changing now, but I’m saying for the general public or the general session that I would go into beforehand it would be a situation where it’s just a laptop and the producer is playing me beats or he’s making them off of his laptop and maybe a mini keyboard is there.  But seeing a whole analog factory inside of like one room–which is the setup at Dave Sitek’s house–it was so inspiring because I’m not limited in any sense of the word.  If I hear a melody, I can play it out.  If he hears a melody, he’s going to bang it out.  It creates these loops and ideas and these ideas get to live while you’re creating live and it really opened my mind to getting a first draft of a song done from scratch instead of using a beat and using lyrics that I’ve already written.  It kind of made the session more meaningful to me.

CB: Is there anyone out there that you would be really pumped to work with?  Any dream collaborations?

Pell:  Hmmm… dream collabs… Definitely would want to work with Andre 3000 and Big Boi.  Outkast are like my favorites, so probably them and then shortly after them is Kanye.  That goes without saying.  Those are my dream collabs.

CB: I know recently you played ACL, you were at Forecastle and Bottlefork and you’re about to be at Voodoo.  Are there any career highlights you’ve had so far?

Pell:  Yeah, one of my main career highlights is flying my mom out to this Napa Valley festival–it was Bottlerock.  Prayers to Napa Valley by the way because I know they’re going through hell with the fire.  But I was able to fly my mom out earlier this year on my birthday month to come and see me perform and also got to take her out and explore some of the wineries cause she’s a fan of sangria and stuff like that, so it was cool.  That was really one of my highlights because I got to do something for my family in a way that they could appreciate in real time like the performance as well as the person.  It wasn’t just like me talking about accolades, it was something that was cool for us to share.

CB: The experience together.  Awesome.  I know we are running up on time, so anything we should expect from the live show or any last words you might have for your fans?

Pell:  Yeah, I’m bringing a live band from here on out.  It’s gonna be crazy.

CB: Nice, yeah, that definitely changes the vibe at the show.

Pell:  It does.  I feel like because of the type of music I make, with it being so versatile so to speak and sometimes in my mind, when I create I have this like ADD, I think that it’s good to have some type of anchor.  A lot of times you find that in having a guitar or drums and keys to center everything so that you can take them on a musical journey, but at the same time they’re still engaged with what’s going on on the stage.  It’s dope!