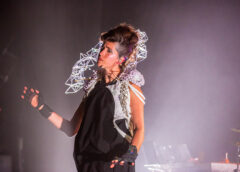 Some artists are extremely influential and many may not even know. Imogen Heap is one of those artists. With a background of being classically trained in multiple instruments, her creativity has been vast in the music that she has created over the years. Focusing on a more electronic sound with a pop feel, Imogen Heap has created some memorable tracks that have been featured in TV and film. She also became a popular collaborator with some of the biggest artists today due to her creativity and use of technology in her creation of music.

This past Tuesday she returned to Chicago after almost a decade and it was well worth the wait. Fans packed The Vic to witness an absolutely beautiful show. Her current tour, MYCELIA, she has brought along longtime friend and former band mate Guy Sigsworth of Frou Frou and the night was pure magic.

Imogen Heap not only is an amazing singer and musician, but she also is a thoughtful and heart warming story teller. Throughout the night, she and Guy ventured through a wide array of music from over the years while telling stories from the past and answering questions from the audience. Even with the show being completely sold out, it was a very intimate show that allowed fans to feel included in all that was going on on stage.

Some of the biggest highlights of the night were from “First Train Home”, “Let Go”, “Headlock”, “Hide and Seek”, and Goodnight and Go”. One of the instruments that was extremely influential in giving the entire show such a unique sound was through her Mi.Mu Gloves that she helped create and design. Currently the only pair available and lent to Ariana Grande to use for one of her tours, these gloves can bend, shape, and manipulate sound to create a whole new way to experience music. To see Imogen Heap flow around the stage with her rhythmic movements of her hands, it was one of the most intriguing displays I have seen in a long time.

It’s not often that you can get a chance to see her perform live and this tour has only about a dozen dates being played in North America. From the reception that she has received on this tour, Imogen Heap should feel very strongly about performing another tour back in the states hopefully sooner then you may expect. Do not miss her the next time she comes back, it will be so worth it to see her on stage.