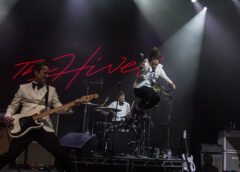 The Vic was treated to one hell of a sold out show with 3 amazing bands giving it there all. The Hives, Refused, and Bleached had the crowd going crazy all evening and for good reason. It was a night filled with hard hitting punk music that gave fans a chance to channel their angst and frustration from today’s social climate.

This was the first time that Refused and The Hives had played together since 1998. Both bands played their hearts out and were very vocal with the crowd all night.

Refused took the time to talk about social injustice and the current war on women. It was passionate and honest and fans really connected with Dennis Lyxzén. Anyone that was looking to go to the show and have the bands just play music were probably not happy considering that this was a very politically charged show. Dennis even made late of this in the middle of the Refused Set.

The Hives were more focused on giving fans the best show that ever was. Howlin’ Pelle Almqvist was an absolute showman pumping up the crowd and giving little quips in between songs that would lead right into the next song. The audience was completely engaged in the set because of Pelle’s charisma.

This was a night filled with amazing music and Bleached impressed everyone that made it to the show early. These 3 acts are very much worth your time in researching and taking a listen too. Be sure to check them out the next time they roll through town. Who knows, they all very well could be performing at Riot Fest in September. We’ll just have to wait and see.

Enjoy the photos below and if you were at the show, let us know what you thought.