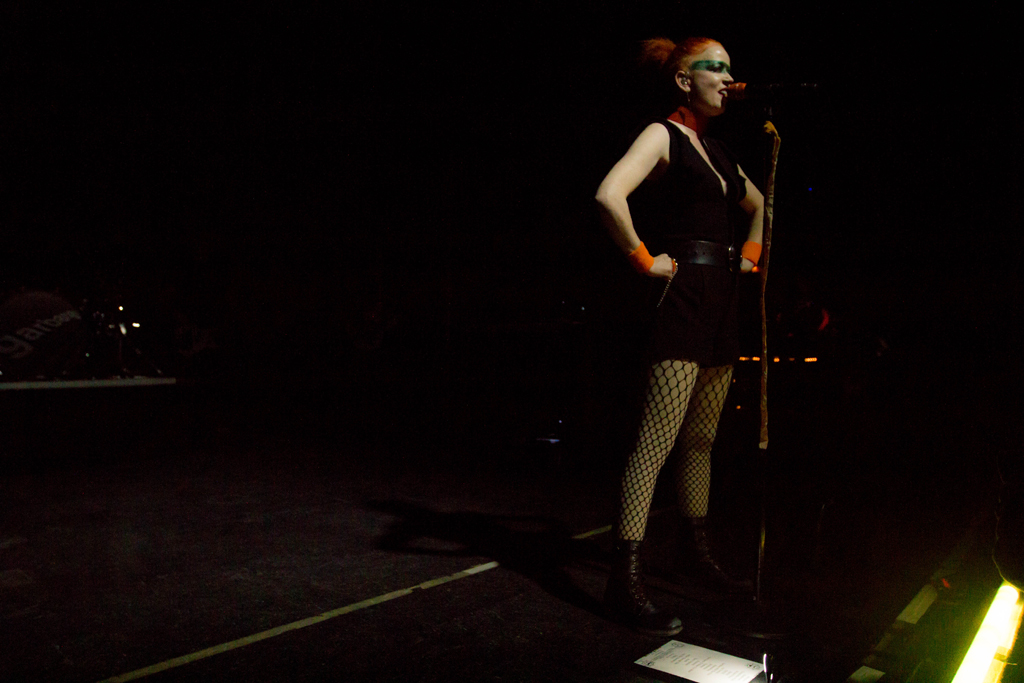 Over the past 5 years they have seen a new resurgence with the trend of 90’s acts becoming a hot commodity on tours. Garbage has seen now 3 successful shows in Chicago recently.  The first being the 20th anniversary of their debut album in 2015 at the Riviera, touring with Blondie and making a stop at Ravinia last year, and their tour for the 20th anniversary of Version 2.0 at the Riviera this past Wednesday.

Rituals of Mine opened the night for Garbage. Hailing from Sacramento, this electronic duo performed a chill yet beautiful set. Terra Lopez was on vocals and had a very powerful voice and Dani Fernandez was on drums, MPC and SPD-SX. The set was short, but fans waiting to see Garbage perform were eager to hear more and responded well to their set.

Not only did die hard and casual fans get to hear the full album of Version 2.0, but Shirley Manson and the guys pulled out countless B-sides, a couple covers, and their James Bond Title song “The World Is Not Enough”.

Shirley Manson has not lost a step onstage. Her voice is still as beautiful and captivating as it was from when Garbage first became a band. And her attitude is one that will not take shit from anyone. She speaks her mind, stands up loudly for women’s rights and will most certainly put you in your place if you are in the wrong. That doesn’t mean she is not full of love for her fans and people in general because she most certainly is.  She just wants to right the wrongs that have been pushed in to the forefront in today’s social climate.

Besides hearing the big hits from Version 2.0, the biggest highlights of the night were in a couple of B-sides. The first was a song that the band needed to come up with in about 24 hours for the record label and to them it may have been an absurd song to make, but “Get Busy With the Fizzy” was catchy as hell and fans ate it up.  The other was an incredibly powerful song called “Soldier Through This”. A song about men who feel emasculated being by the side of a more successful woman and how the relationship does not work out because the man feels like the roles should be reversed and resents the woman he is in love with.  Shirley made it a point to let the men in the audience know that the song is not about bashing men.  It was more of a message for men to man up and not be resentful.

Overall the show was full of love from the band to the fans and the fans to the band.  After all these years, you could see that Garbage is still one of the great alternative bands from the 90’s that has found their way into being an important part of the current music scene. Even though this may have been an anniversary tour for them, they are still pumping out new music and will have another new record on the way in the near future.

Enjoy the photos below.