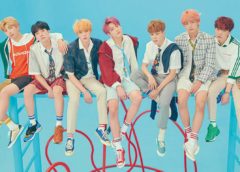 This week we’re talking about The Cure’s new anniversary shows, BTS’ massive world tour, and a new benefit to help Chicago’s own Jerry Bryant. All this plus the weekly local artist and upcoming shows On the Radar.

The biggest boy band on the planet, BTS, have announced a huge world tour. The trek will see them play stadiums in North America, Japan, Europe, and South America. Currently, the “BTS WORLD TOUR LOVE YOURSELF: SPEAK YOURSELF” tour features ten dates and kicks off in May with shows in Los Angeles, New York City, and Chicago, where they’ll play Solider Field. From there, BTS will visit Sao Paulo, London, and Paris before concluding in July with four massive concerts in Japan.

A number of Chicago artists are teaming up to help one of the city’s music icons. The host of America’s longest running music television program JBTV Music was diagnosed with Stage 4 colorectal cancer last year. He has since undergone two surgeries to remove tumors from his colon and lung.

He’s currently in the middle of a six month stint of chemotherapy, but lacks the financial means to support it. To help raise funds the Metro will hold Strange for 90s – A Benefit for Jerry Bryant of JBTV.

Performers include Naked Raygun, Andrew W.K. and Local H along with members of Kill Hannah, Stabbing Westward, OURs, Broken Hope, Morrisey and more.

Tickets start at $25 and all the money goes to Jerry Bryant’s cancer treatment fund. Get all the information here. You can also donate directly to Jerry here.

The Cure recently announced a new batch of shows celebrating the 30th anniversary of their iconic album, Disintegration. The band will play the LP in full along with rare b-sides and deep cuts during these shows. The dates kick off May 24th, 25th, 26th, and 28th at the Sydney Opera House in Sydney, Australia as part of this year’s Vivid Live.

“Our Reflections shows in 2011 were truly memorable experiences, and with the excitement surrounding those early album performances in mind, we are more than delighted to be announcing our return in May 2019 to present the world premiere of Disintegration – 30th Anniversary,” said Robert Smith in a statement.

For tickets and more information, visit the festival website. Meanwhile, The Cure is set to be inducted into the Rock and Roll Hall of Fame along with Stevie Nicks, Radiohead, Janet Jackson, and Roxy Music among others. The ceremony takes place March 29 in Brooklyn, New York. Find tickets here.

Catch Sevendust with Cane Hill, Tremonti, Lullwater, and Kirra at the House of Blues Tuesday, February 26. You can still grab tickets here.

The legendary Kiss brings their End of the Road tour to the United Center Saturday, March 2. This is (apparently) your last time to see the band live, so get tickets!

Andrew Mcmahon’s The Upside Down Flowers tour hits up the Riviera Theatre with Grizfolk and Flor Saturday, March 2. Grab tickets while you still can.