Also appearing at the event is Cassper Nyovest, D’banj, and Sho Majozi. Serving as hosts are Naomi Campbell, Tyler Perry, Gayle King, Sir Bob Geldof, Bonnang Matheba, and Forest Whitaker. Oprah Winfrey will deliver the keynote address. The festival takes place December 2 at Joburg’s FNB Stadium and will serve as the culmination of a series of events around the world celebrating Nelson Mandela.

Like other Global Citizen events, free tickets will be given out to those who perform various charitable acts prior to the festival. Paid tickets will also be available at a later date. Find more information here.

The summer jams keep coming with these surprise releases from Childish Gambino AKA Donald Glover. He dropped the songs online last Wednesday (July 11) under the title “Summer Pack.” With the songs titled “Summertime Magic” and “Feels Like Summer” they’re a more upbeat affair than his critically acclaimed track “This is America.” Check out the latter song above.

Childish Gambino will embark on a North American fall tour starting September 10 with Rae Sremmurd and Vince Staples. The tour will hit up Chicago’s United Center September 8 before it wraps up in Nashville, TN October 12. For tickets and all dates, click here. 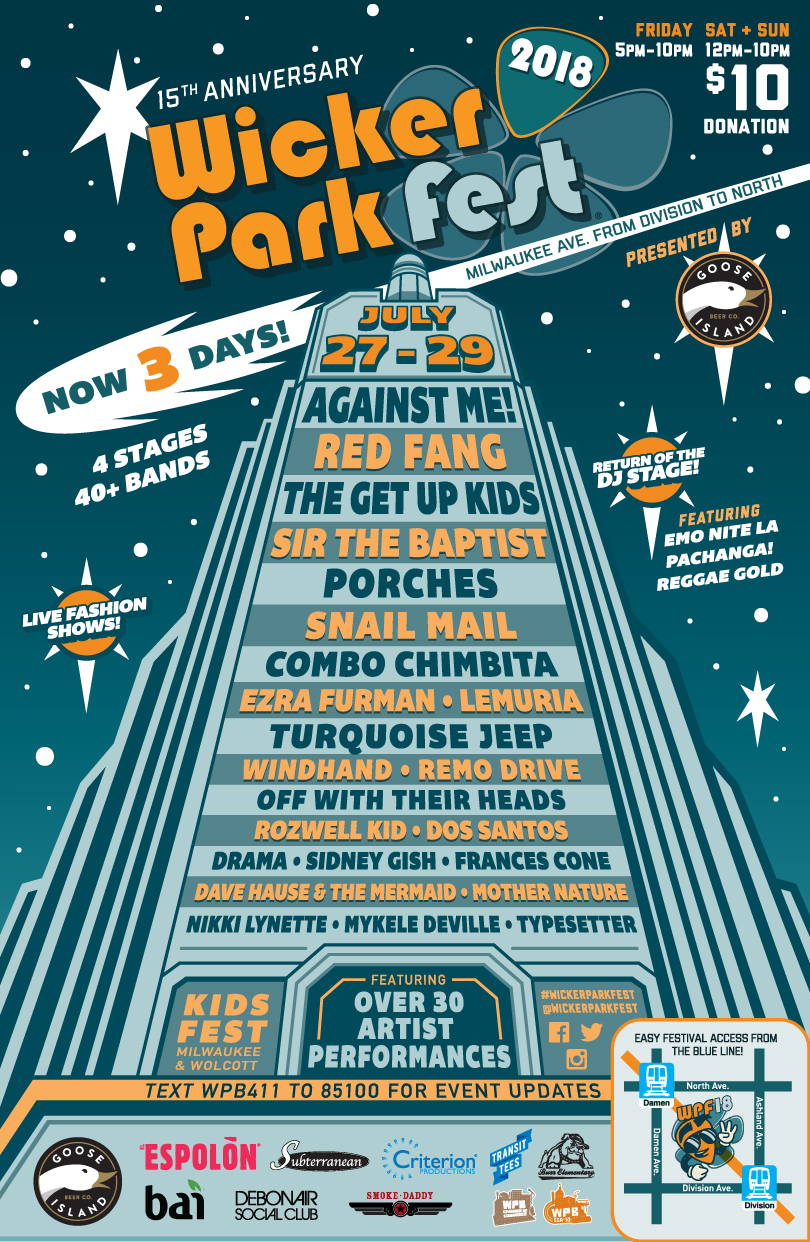 Wicker Park Fest is only a few weeks away and now, the full lineup has been revealed. Headlining the event are The Get Up Kids, Red Fang, and Chicago’s own Sir the Baptist. Also playing the festival are Combo Chimbita,  Ezra Furman, Mother Nature, Snail Mail, DRAMA, and Against Me! to name a few.

Recently expanded to three days, Wicker Part Fest kicks off July 27 at 5 PM and continues on July 28 and 29 at noon – 10 PM on Milwaukee Ave., from North Ave. to Pauline street. There’s a suggested donation entry fee of $10 that will benefit the Wicker Park Bucktown Chamber of Commerce. For tickets, directions, and the full lineup visit the Wicker Park Fest website.

R&B crooner Kenny Latimore plays at City Winery on July 20. Make sure you get tickets here.

The Vans Warped Tour hits up Chicago one last time before signing off. The lineup includes 3OH!3, Beartooth, Waterparks, Simple Plan, Motionless in White and more. It all goes down July 21 at the Hollywood Casino Amphitheater. Get tickets here.

Chance the Rapper is celebrating the 50th anniversary of the Special Olympics with a concert featuring Usher, Frances and the Lights, Smokey Robinson, Daya, O.A.R., Jason Mraz and more. It’s happening at the Hunting Bank Pavilion at Northerly Island on July 21. Get tickets here.

Sen Morimoto’s debut album, Cannonball!, received wide critical acclaim when it came out back in May. And it’s easy to see why. The Chicago rapper/multi-instrumentalist brings a fresh perspective to hip-hop. His music is an intricate mix of hip-hop and jazz. Morimoto not only raps, he also plays saxophone on his tracks, including his latest single “People Watching.”

The video, directed by Scott Cramer, is like a guided tour of Chicago. We see people on the streets of the city going about their daily business. Meanwhile, Morimoto poses on corners and near landmarks doing some people watching himself and being a focus of it as well. Check out the video above. The rapper also recently contributed to Ric Wilson’s new EP, BANBA.

Originally born in Kyoto, Japan, Morimoto grew up in Western, Massachusetts and stated studying jazz saxophone at a young age. In 2014, he moved to Chicago and started producing for artists like Joseph Chiliams, KAINA, and Nnamdi Ogbonnaya. He previously released EPs For Me & Ladie and It’s Late Remastered, in 2015 and 2017 respectively. Make sure to check out Morimoto’s music at Bandcamp and follow him on Facebook and Twitter for the latest updates. You can catch Morimoto live at Schubas on July 20.