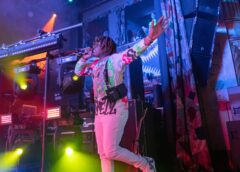 Chicago was in for a treat when Gunna announced the Drip or Drown 2 tour with Lil Keed. The House of Blues Chicago played host for the sold out night. Gunna is a Hip-Hop Artist hailing from Atlanta and making major movement since releasing his debut album Drip or Drown 2. Gunna’s album swept the world with it becoming the #1 Hip-Hop album and reaching #3 on Billboard Top 200 Charts.

Gunna took the stage and the entire crowd erupted as the floor shook nonstop. It’s safe to say Gunna has fans that truly love him and the music he creates. His set featured songs like Wit It, Speed It Up, Drip Too Hard, Oh Okay, Speed It Up and more. Gunna’s fans rapped and sang along with him as he went through his catalog. The Drip or Drone 2 Tour is something you don’t ever want to miss. So many positive vibes when Gunna hits the stage.