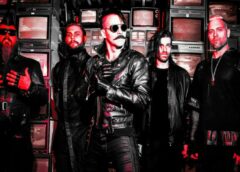 3Teeth crashed onto the rock scene six years ago with their brutal, unapologetic sound. Critics and fans alike praised their sound. They even impressed Tool who took them out on their North American tour. It didn’t take long for them to grow an army of fans. Now, on their third album, the band have reached headliner status. They brought their intense Metawar tour featuring GosT and Author & Punisher to Reggie’s Rock Club Wednesday (July 24) night.

GosT kicked off the night with a high energy set featuring blinding lights, rapid-fire music, and Baalberith, the man behind the project, wildly thrashing over his keyboard. GosT’s music is an infectious blend of ‘80s synth with harsh guitars and darkwave elements. It’s got enough of a catchy beat to dance to, but the growling music, roaring guitars, and Baalberith’s ear-piercing screams gives it a dark, aggressive vibe. The set was brief, but the music along with Baalberith bouncing around the stage assaulting the mic left many in the crowd impressed.

The mood shifted when Author & Punisher took the stage. Tristan Shone, the only member in the band, thrashed and stomped over his Frankenstein synth setup like a mad scientist. The heavy and violent music fills you with an overwhelming sense of dread. The nightmarish performance featured songs “Nihil Strength,” “Apparition,” “Pharmacide,” and “Beastland.” Shone’s set is an assault on your senses with music that strikes you at unexpected moments. It’s frightening, yet captivating. Author & Punisher is an absolute force. The crowd was left in awe watching one man create devastating and doom-laden music on a kit he built with his own hands.

With the crowd properly fired up, 3Teeth walked out on the blood-red stage to deafening roars. Opening with “Divine Weapon” their set was a whirlwind of fury, anger, and chaos. As soon as the band started, bodies collided against each other and the mosh pit continuously grew throughout the night. Fueled by generous shots of Merlot, the band powered through tracks from their new album, Metawar (“EXXIT,” “Bornless,” “American Landfill”) along with staples from their first two records (“Dust,” “Atrophy,” “X-Day,” “Master of Decay”).

Violently attacking their instruments, the band was downright menacing, which was enhanced by the red lights and smoke that shrouded them. Frontman Alexis Mincolla’s growls and screams rallied the crowd as if preparing for war. Decked out in leather and his standard dark sunglasses, Mincolla he commanded the stage with his intimidating, yet mesmerizing presence and swaying dance moves. Their intense set ended with “President X” with Mincolla donning a trench coat and leather mask. Before walking off stage, he commanded people to vote in the upcoming election and disappeared behind a curtain of smoke.