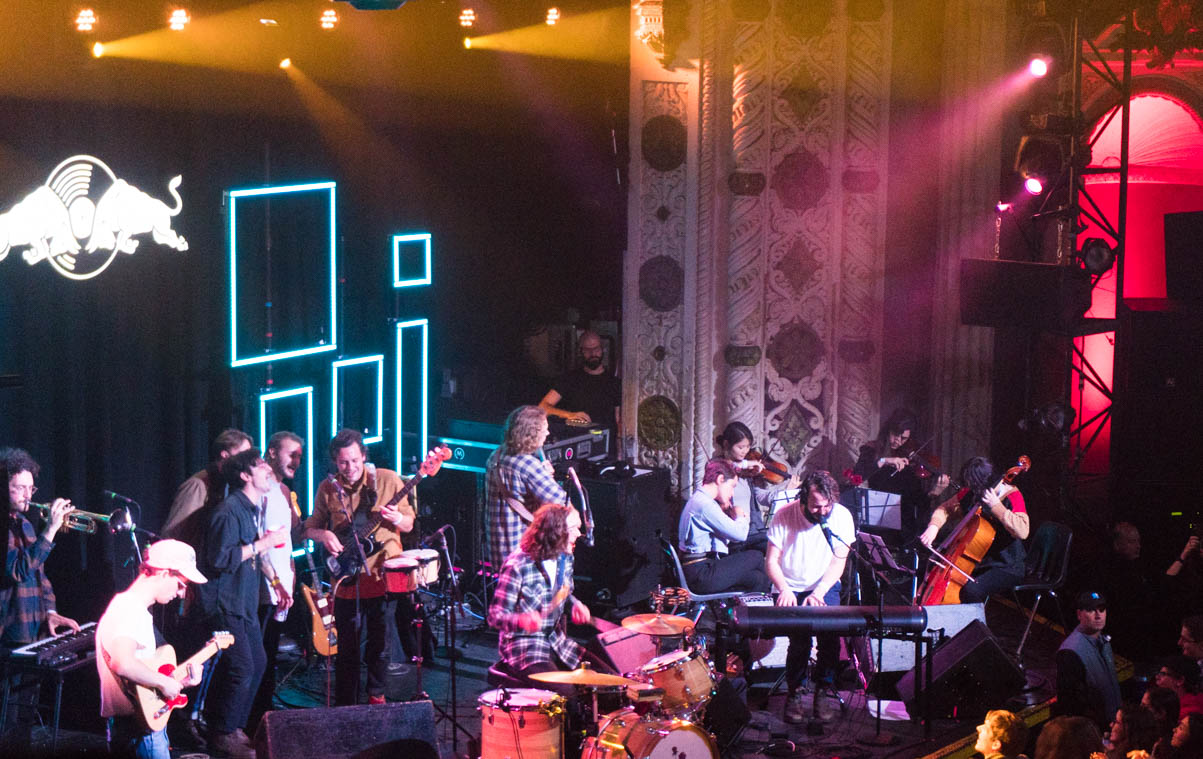 Night two of Red Bull Sound Select’s 30 Days in Chicago was incredibly impressive from start to finish.  The sold-out Metro show featuring Whitney, NE-HI, and Mt. Joy united the indie folk scene’s rising stars. The Red Bull team decked out the Metro with some old-school TV displays advertising other shows on their 30 Days in Chicago lineup, including upcoming shows for The Internet’s Syd and soulful duo Ibeyi.  It wouldn’t be a Red Bull show without some Red Bull cocktails to give fans wings for this late weeknight show.

Overall, night two of Red Bull Sound Select’s 30 Days in Chicago created sort of an uplifting communal folk rock vibe.  This group of musicians put together sets that made me feel at home amidst all the energy and visual stimuli carefully staged throughout the Metro.  These bands are spawning the next generation of folk rock and it’s looking pretty damn promising.

L.A.-based quintet Mt. Joy only has four songs on Spotify, but they’ve already played with  The Shins and The Head and The Heart.  The band opened the show strong, hitting all their released tracks.  About midway through their set, singer/guitarist Matt Quinn broke a guitar string.  The band pushed through, ending with “Silver Lining,” a song they released earlier that day.  The new jam, which starts off sounding like Bon Iver’s “Skinny Love,” picks up steam incorporating a folk rock anthemic sound similar to The Lumineers “Ho Hey.”  Not only do their catchy songs make for super fun sing-a-longs, the band seems to genuinely enjoy themselves onstage.  Keep an eye and an ear out for their album coming next year.

The indie rock quartet NE-HI banded together in 2013 to score a friend’s film, then proceeded to start a band when the film fell through.  They’ve since released two albums–including this year’s Offers–and have toured with Whitney, Twin Peaks, and Car Seat Headrest.   The Chicago locals put on a hell of a show.  With singer/guitarist Jason Balla’s  almost spastic stage presence, sketched out facial expressions, and unique way of holding a guitar, it almost looks he’s some sort of warrior fleeing an enemy in a first person shooter.  Replace that overall image with a guitar and some good old Americana-infused rock and roll and it makes for one of the single most fun personalities to photograph at a show.  The band’s energetic performance makes them one of those local bands that will undoubtedly have a steep upward trajectory.

Local act Whitney played an impressive hometown set complete with a mix of covers and tracks off their debut album Light Upon the Lake.  Their set started with singer/drummer Julien Ehrlich on keys performing a cover of Dolly Parton’s “Gonna Hurry (As Slow As I Can).”  Fans looked on adoringly grasping onto long-stem red roses that had been distributed or somehow uncovered between sets.  The band threw it back with several other classics, covering Neil Young, Bob Dylan, and NRBQ.  With a pretty mellow-sounding record, the live performance really brought their sound to life.  Their unique setup with Ehrlich center stage playing drums and singing makes for a rad experience given most shows usually have drums relegated to the back of the stage.

Their performance was solid enough on its own, but they didn’t stop there.  Whitney brought on 4 string instrumentalists to join them for the last few songs.  They even welcomed some of their friends onstage for the encore to help sing along.  In typical Whitney fashion, Ehrlich made out with some guy onstage.  Towards the end of the set their buddy Frank decided to crowd surf, but sadly was dropped promptly as the crowd seemed completely unaware of how to handle a stage dive.  They rebounded somewhat quickly, but not before gasps and laughter erupted from the rafters.  The band ended with a much longer, more glorious rendition of their hit “No Woman.”