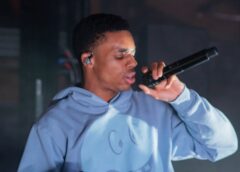 House of Vans Chicago has officially launched their summer concerts House Parties. This series of concerts feature artists, bands and musicians from across the world. Vince Staples kicked off the first show with an energy filled set at this one of a kind venue. Vince has come to Chicago previously, but this show was different. The House of Vans is unique experience because it takes place inside of an indoor skate park and everything is FREE! Fans and VIPs were able to see their Vince perform live in an intimate venue with hosted bar provided by Goose Island.

Vince Staples took the stage for what would be a performance to remember. Fans pushed their way to front to feel and channel Vince’s energy. Performing songs such as Year Right that set the tone for the night. Vince took a moment to address his screaming fans and grab his asthma inhaler. Once he was back to himself he rocked songs like Outside, Norf Norf, Big Fish and more. His final number was Feels Like Summer was the perfect way to end his set. It’s safe to say Vince Staples was the right choice to kick off House Parties.