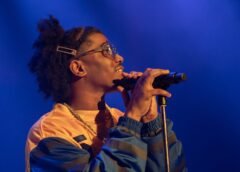 Smino from Zero Fatigue is currently on the Hoopti Tour after releasing his latest album NOIR. Taking stake at House of Blues Chicago for two sold out nights was incredible with Smino, Phoelix and EARTHGANG. The energy in the building was so intense as fans waited for Smino to take stage. Greeted by a screaming crowd he takes time to put on his one of a kind signature pair “Air Force Ones.” Smino went through some of our favorite songs like TEQUILA MOCKINGBIRD, Z4L and Anita just to name a few. Smino also brought out Chicago’s own Saba and Monte Booker who he has collaborated throughout the years.