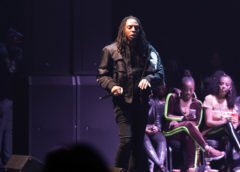 Chicago Music and Zo Ent has their sights set high on Chicago’s Hip Hop Hippie Rockstar Rodie. Following up from his spectacular performance at Summer Jam 2018 at the United Center. Rodie’s performance was high intensity from the time he took the stage. His set consisted of songs from his mixtape “Perfect Timing” which will be released on New Year’s Eve. Be sure to check out his music and show some love for Chicago’s own.