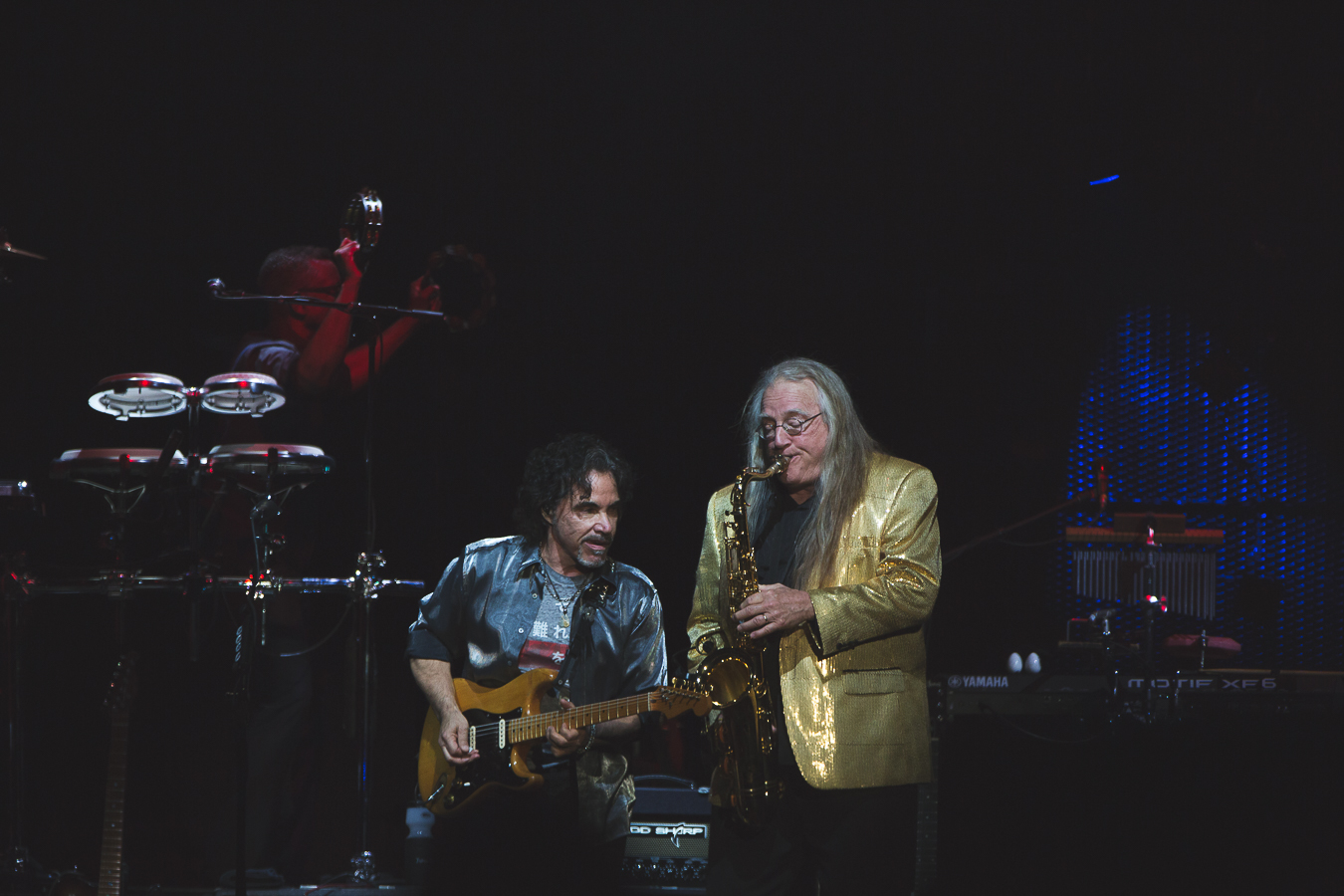 On Monday night (May 15) two of the 80’s biggest duos took us back in time. Hall and Oates and Tears for Fears turned the Allstate Arena into a throwback party.

Soul crooner Allen Stone opened the show spending just enough time on stage with three tracks. Though it was only him and his guitar, he still managed to leave an impression with his powerful vocals. He gave the crowd a break and performed a cover of Aretha Franklin’s “I Say a Little Prayer.” He was a perfect opener: quick, gracious, and friendly receiving a warm welcome from the crowd.

As soon as Tears for Fears stepped out on stage, the crowd roared like it was Harry Styles. Opening with “Everybody Wants to Rule the World” everyone danced in the aisles, while the duo proved they haven’t missed a beat since their 80s heyday. The two ran through hits from their massive albums The Hurting and Songs from the Big Chair, like “Mad World,” “Memories Fade,” and “Head over Heels” taking everyone on a nostalgic ride. Their set was full of messages of love and positivity with songs like “Change” and “Sowing Seeds of Love” making you forget the craziness of the world for a while.

Roland Orzabal and Curt Smith worked the crowd encouraging them to sing along and sending them into a frenzy walking over to different sides of the stage. Their voices are as strong as ever. There’s no doubt Tears for Fears sounded great; Orzabal can still sing with the best of them while Smith still has that sweet baby voice you remember from back in the day.

After some light bantering, Orzabal led the band into a beautiful rendition of Radiohead’s “Creep.” Removing the angry bits of the song, it came across like a mellow lullaby, making for one of the most memorable parts of the evening. They closed their set with their breakout hit “Shout” getting everyone on their feet, fist pumping in the air. Judging from the all-around smiles from everyone on stage, it’s clear they were having as much of a blast as the crowd was.

Hall and Oates have been playing together for over 40 years and they still sound fantastic. Opening with “Adult Education,” it became clear the two can still rock. John Oates still knows how to make a guitar scream in all the right places and Daryl Hall’s voice is stunning, hitting all the falsetto notes and sweet spots of his youth. Next came the sleek stylings of “Maneater,” with a smooth sax solo from DeChant. He was the breakout star of the show in his glittering gold blazer and long flowing white hair.

The duo played it safe and stuck with the hits. It would’ve been nice if they were more spontaneous and tossed in some deep cuts rather than sticking with their Top 10 singles. Still, they know their audience wants to shimmy to “Out of Touch (Out of Time)” and sway to “Sara Smiles.” And when you remember how great these songs are, you can’t complain.

While you would expect undeniable jams like “You Make My Dreams” and “Did It in a Minute” to get the crowd riled up, what got them going were the slow jams. As soon as Hall sat at the piano, the arena lit up, knowing what was coming next. The duo then played some of their biggest hits, including “You’ve Lost that Loving Feeling,” prompting a mass sing-a-long, “She’s Gone,” and “Wait for Me.” The crowd cheered, some swaying with arms around their loved ones.

After setting a romantic mood, the band got right back to rocking out with “I Can’t Go For That (No Can Do).” They turned the Private Eyes hit into an extended jam session, with an extra-long sax solo from DeChant, earning him a roar of applause. For their obligatory encore, they pulled out their biggest hits starting with “Rich Girl,” getting lots of love from the crowd. From there they seamlessly launched into “Kiss is on My List.” They closed the night with “Private Eyes” as everyone copied the famous handclap rhythm.

Though their set was plagued with feedback issues, they played through it never breaking their stride like true professionals. In the end, it didn’t take away from how much fun their set was. The night proved Tears for Fears and Hall and Oates still know how to bring the house down.