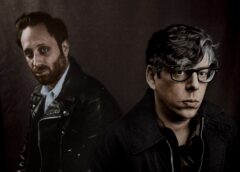 This week we’re talking about Tool and The Black Keys on tour, Rock and Roll Hall of Fame presenters plus this week’s shows. All that and more On the Radar.

Tool is still hard at work on their highly anticipated album, but at least you can catch them on the road this summer. The band announced a new set of dates that they’ll play in between their festival appearances, which include Chicago Open Air, Epicenter, and Welcome to Rockville. The new shows will take place mainly in the Southeast and Midwest including Birmingham, Alabama; Louisville, Kentucky; Hampton Virginia; St. Louis, Missouri; Kansas City, Missouri; Lincoln, Nebraska; and Des Moines, Iowa. Find all the dates here. Tickets are on sale now.

It seems Tool are nearly done with their new album. A few weeks ago, they posted a photo of members Danny Carey, Adam Jones, and Justin Chancellor posing with producer Joe Baressi and engineer Bob Ludwig, suggesting the album is near completion. Hopefully, we’ll get more information soon.

David Byrne, Trent Reznor, Harry Styles and more to present at the Rock and Roll Hall of Fame 2019 Ceremony

This year’s presenters for the 2019 Rock and Roll Hall of Fame ceremony have been revealed. Those inducting the honorees this year include Trent Reznor for The Cure, Queen’s Brian May for Def Leppard, Harry Styles for Stevie Nicks, Janelle Monae for Janet Jackson, David Byrne for Radiohead, The Bangles’ Susanna Hoffs for The Zombies, and John Taylor and Simon Le Bon for Roxy Music.

The ceremony takes place at the Barclays Center in Brooklyn, New York on March 29. While details on performances haven’t been revealed, Stevie Nicks, Roxy Music, Def Leppard, and the Zombies are all expected to perform. The induction ceremony will be broadcasted on HBO on April 27.

A week after sharing their first new song in five years, The Black Keys have announced a North American tour. The “Let’s Rock” tour will feature Modest Mouse as support along with performances from Shannon and the Clams, Repeat Repeat, and Jessy Wilson on select dates.

Shows kick off September 23 in Denver, Colorado and will make stops in Chicago, Cleveland, Milwaukee, Detroit, and Boston. The tour concludes November 24 in Vancouver, British Columbia. The band will hit up Chicago’s United Center on September 27. Check out all the dates here. Tickets are on sale now. The Black Keys recently shared their new single “Lo/Hi” marking their first new music in five years.

Chicago’s own Cupcakke plays Thalia Hall with DH Taye and Haiku Hands Thursday, March 21. You don’t want to miss this, so get tickets here.

Don’t miss Metric with Zoe and July Talk at the Aragon Ballroom Friday, March 22. You can still get tickets here.

A Boogie Wit Da Hoodie plays a sold-out show at the House of Blues Friday, March 22. Tickets are gone, but you can win a pair here.

Jeff Tweedy returns to The Vic for his annual benefit shows where he dives deep into his extensive song catalog for two nights: Friday, March 22 and Saturday, March 23 (sold out). Get tickets here.