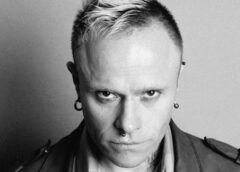 This week we’re talking about Slipknot’s summer tour, the sick Pitchfork lineup, remembering Keith Flint and more On the Radar.

Slipknot are making their live return this summer with their massive Knotfest Roadshow headline tour. Joining them on this outing are Volbeat, Gojira, and Behemoth. The tour kicks off July 26 in Mountain View, California and concludes September 8 in The Woodlands, Texas. Slipknot and friends will play the Hollywood Casino Amphitheatre in Tinley Park on August 11. Find more details here. Tickets are on sale now.

Slipknot also revealed that their highly anticipated new album will release August 9. So far, no other album details have been released. Revisit the band’s latest single, “All Out Life,” above.

It all goes down at Union Park from July 19 to July 21. Tickets are currently on sale for $75 a day or $175 for a three-day pass. The Pitchfork PLUS tier is also available and includes premium food vendors, private specialty bars, and air conditioned bathroom for $375. Get all the details here.

The Prodigy’s Keith Flint dies at 49

Keith Flint, the unforgettable frontman of British electronic group The Prodigy, died at 49 years old. He was found dead in his home in Essex, England.

The Prodgiy released a statement saying “It is with deepest shock and sadness that we can confirm the death of our brother and best friend Keith Flint. A true pioneer, innovator and legend. He will be forever missed. We thank you for respecting the privacy of all concerned at this time.”

An official cause of death wasn’t released, but Prodigy founder Liam Howlett wrote on Instagram that Flint took his own life. “The news is true, I can’t believe I’m saying this but our brother Keith took his own life over the weekend. I’m shell shocked, fuckin angry, confused and heart broken ….. r.i.p brother.”

The Prodigy recently wrapped up a tour of Australia with plans to play shows in Colombia and Austria in April followed by a U.S. tour in May. They were also booked to play various European festivals this summer including Spain’s Doctor Music Festival and the South West Four event in Clapham, London.

Our thoughts go out to Flint’s family and friends during this difficult time.

The iconic Mariah Carey is coming to the Chicago Theatre Monday, March 11. You don’t want to miss this, so get tickets here.