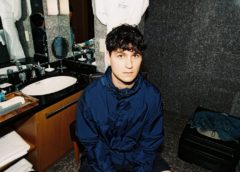 Kick off the week by catching up on music’s biggest stories and more with this week’s On the Radar.

Kendrick Lamar has been nominated for his first ever Academy Award. Lamar and SZA’s collaboration for Black Panther’s, “All The Stars,” is one of the five nominees for Best Original Song at the 2019 Academy Awards. Other contenders for the award include David Rawlings and Gillian Welch for “When A Cowboy Trades His Spurs For Wings” (The Ballad of Buster Scruggs); Diane Warren for “I’ll Fight” (RBG); and Scott Wittman and Marc Shaiman for “The Place Where Lost Things Go” (Mary Poppins Returns) and Lady Gaga and Bradley Cooper’s “Shallow” from A Star is Born.

Black Panther is up for seven Oscars, including the coveted Best Picture, making it the first superhero film in history to receive a nomination. Check out all the nominees here. The Oscars air live on Sunday, February 24.

Congrats to Lamar and all the nominees!

Vampire Weekend will return with their long awaited fourth album, Father of the Bride, this spring. The band recently shared the first two songs from the upcoming LP: “Harmony Hall” and “2021,” which you can listen to above. The new songs mark the band’s first new material in nearly six years. They also shared the album’s artwork.

According to a press release, the album’s title, Father of the Bride, “is something frontman Ezra Koenig chose years back, well before recent significant developments in his life. In typical VW fashion, the title has multiple layers of meaning, expressing the band’s signature paradox: creating songs that easily find a home on any playlist—or car radio, TV show, film soundtrack, airport PA, etc.— but reveal their complexities upon closer listening.”

Father of the Bride is a double album featuring 18 tracks. Vampire Weekend plans to release at least six new songs over the next three months.

Pop songstress Ariana Grande has revealed the release date and tracklisting for her new album, thank u next. Grande broke the news on Instagram with a photo of the tracklisting. The caption reads “feb 8,” which is when the LP will drop. The 12-track LP features the previously released singles “7 Rings,” “Imagine,” and “thank u next.”

In support of the album, Grande will head out on her “Sweetener World Tour” in March. This also includes her headline appearance at Coachella. Check out her tour dates here.

Spend the evening with Dawes at The Vic Theater Tuesday, January 29. You can still get tickets here.

Catch Story of the Year with special guests Bury Me in Lights, and Open Your Eyes at Bottom Lounge Thursday, January 31. You still have a chance to get tickets here.

Check out singer/songwriter Dorothy on her Freedom Tour Saturday, February 2 at Bottom Lounge. Get tickets here.

Wht.rbbt.obj is a mysterious rock duo based in Chicago. You don’t find much information about them on their Facebook page. The only things we know is they’re a married couple who call themselves Francis and River. While the project is new, the people behind it have roots in the Chicago music scene. They call wht.rbbt.obj as their “little special secret project” that they’re ready to share with fans.

So far, they’ve released two singles “Silence” and “Unlucky 13” both highlighting their 60s inspired garage rock sound. Their blend of rock, psychedelia, and punk makes their sound raw and ferocious. The vocals are intense, killer, and fierce with firey passion that’s hard to get out of your mind. Clearly, this duo is just getting started, but we can’t wait to hear more. And hopefully, we’ll get more answers to this mysterious band.