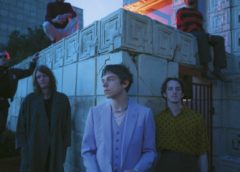 Recover from the polar vortex by checking out music’s hottest stories with this week’s On the Radar.

Billie Eilish announces debut LP ‘When We All Fall Asleep, Where Do We Go?’

Billie Eilish, one of the hottest artists of 2018, has officially announced her debut album. Titled When We All Fall Asleep, Where Do We Go? the record drops March 29 via Darkroom/Interscope Records. Eilish also shared the eerie artwork and tracklist for the album. The 17-track LP features previously released singles “you should see me in a crown” and “when the party’s over.”

Eilish also shared new song “bury a friend” from the upcoming record, which you can check out above. She also recently released the song “When I was Older,” from the upcoming album Music Inspired by the Film Roma. Eilish also has a number of festival appearances lined up for the year, including sets at Coachella, Reading and Leads, and Lollapalooza Stockholm.

Warped Tour returns this year as a series of 25th-anniversary shows. Though the celebration was teased by founder Kevin Lyman back in December, we now have all the details. This brief run of Warped Tour dates kicks off June 8 in Cleveland, Ohio and will hit up Atlantic City, New Jersey for a two day celebration on June 29 and 30. The run wraps up July 20 and 21 in Mountain View, California.

Warped Tour’s Twitter account states the Atlantic City and Mountain View dates will be full-fledged festivals. “Mountain View & Atlantic City will be same Warped Tour vibe, multiple stages, extreme sports, sponsor activations, non-profits, etc. Cleveland will be scaled back since it’s a more limited / intimate event — it will be outdoors and have a Warped feel, but with 1 stage.” Pre-sale tickets go on sale February 25, while general tickets will be available March 1. The lineup will be announced on the same day.

Kentucky rockers Cage the Elephant are back! The band have announced their fifth album Social Cues, out April 19 via RCA Records. The new record features 13 tracks, including a collaboration with Beck and their new single “Ready To Let Go.” Check out the music video directed by frontman Matt Shultz above.

Recorded in Nashville and Los Angeles, the album was produced by John Hill, known for his work with Florence and the Machine and Portugal. The Man. The album was written during a time when Shultz’s relationship was dissolving.

He explains, “it can be a vehicle to act out things that are hard to confront.” He went on to say, “when I’m creating, I try to put myself in a reactive state of improvisational thought. I let images just arise in my mind and wait for it to evoke an emotional response and then when it does, I know I’m on to something. I was watching a lot of Fassbinder films, like World on a Wire and The Bitter Tears of Petra von Kant. I was thinking about their beauty coupled with the graphic surrealism of Aronofsky.”

Panic! At the Disco keeps those high hopes going with special guest Two Feet at the All State Arena Monday, February 4. Grab tickets while you still can.

Don’t miss Interpol with Sunflower Bean at the Chicago Theatre on Thursday, February 7. Get tickets here.

Catch Subtronics + Blunts & Blondes with Zia at Bottom Lounge, Thursday, February 7. Tickets are selling fast so get them now.

Poppy brings her Am I A Girl? Tour to House of Blues with special guest Flint Eastwood Friday, February 8. You can still get tickets here.

Chicago outfit Lida is the new band on the block, but with their easy breezy sound, they’ll have no trouble finding a dedicated audience. Featuring Noah J. Bauer (lead vocals/guitar), Brian Chindbloom (lead guitar/vocals), and Trent Cairns (bass), Lida formed after these friends met on their first day of school at North Park University. From then on they started writing and making music together. Currently, they balance their time between studying for their classes and performing around the city.

Lida recently released their latest EP, Lida’s Comprehensive Study of the Past Its Prime Hotel.  Featuring catchy songs like “The Past Its Prime Hotel” and “Swimming,” the EP perfectly captures their mellow, easy going sound. Bauer’s soulful vocals are infectious while the upbeat, bright guitars puts you in the mood for summer. Listen and download their new EP here. And check out the rest of their music here.