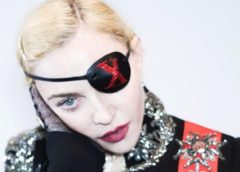 “You guys need to get out of your comfort zones!” Madonna cried Wednesday night (Oct. 16) during the first of seven nights of the Madame X tour at the Chicago Theatre. Her latest trek in support of her new album is all about taking chances and embracing change. She practically forced this idea on her audience by locking away everyone’s cell phones at the start of the night. Already it was clear, this wasn’t going to be your typical concert. Madame X is a unique experience where Madonna subverts expectations, celebrates freedom, and flexes her political voice.

Watching the Madame X tour is like watching a play. The story of Madame X, a spy, a freedom fighter, a whore, a saint, unfolds before you. The set pieces, dazzling costumes, and vignettes take us through Madame X’s journey. We see her start a revolution calling for “a new democracy” on “God Control.” She battles riot cops and is arrested speaking out against social injustices during “Dark Ballet.” Later, she’s interrogated by private detectives on “I Don’t Search I Find.” There were even brief intermissions where Madonna addressed issues like women’s rights, equal rights for all, and abortion. But sometimes her message got muddled in her rambling banter.

When she wasn’t talking about her fabulous life in Lisbon, she cracked raunchy jokes that mustered a few chuckles from the crowd. On one hand, it’s refreshing seeing a superstar used to playing stadiums sharing a beer with someone in the crowd. On the other, these extended ramblings grew tiring. But that’s what you sign up for with Madonna. She’s going to do what she wants to whether you like or not, which is kind of the whole point of this tour.

Even in a small theater, Madonna’s stage show is spectacular. There is no shortage of stunning visuals and great choreography. But where the show suffers is the setlist. Madonna focuses heavily on her new album, practically performing the entire thing. Fans of the album may love it, but those hoping to hear classics were left wanting more. She didn’t completely ignore her back catalog performing reworked renditions of “Papa Don’t Preach,” Frozen,” which was a high point of the evening, and “Human Nature,” where she proved she’s more flexible than you at 61. “Vogue” saw her performing with her clones and she teased an acapella version of “Express Yourself” featuring her daughters Mercy James, Estere, and Stella. Her performance of “Like a Prayer” was a highlight, leaving everyone with chills. While new material like “Medellin” and “Crazy” was received well, you can’t ignore the huge reaction her hits drew from the crowd.

Despite the lackluster setlist and the 10:45 PM start, Madonna’s show is a fun and exciting experience. She subverts expectations whether it’s bringing out a group of Cape Verde batuque singers to aid her during “Batuka” or celebrating the Lisbon culture by covering “Fado Penchincha” by Isabel De Oliveira, and “Sodade” by Cesaria Evora. The visuals, while not as outlandish as her previous tours, were impressive transforming the stage into a Fado nightclub for “Killers Who Are Partying” to a 1970s disco with outlandish outfits featuring lots of fur and sequins on “Crave (Tracy YoungRemix).” Songs like “Come Alive” and “Extreme Occident” proved Madonna’s vocals have only gotten better with age. And she still managed to be lively and electrifying even though she cut back on choreography due to her injured knee. The evening on a thoughtful note with the empowering “I Rise.” Madonna proclaims “I rise above it all” as she walked through the crowd, fists raised in the air.

The Madame X tour isn’t for everyone. The lack of hits during the setlist, the start times, and a chatty Madonna won’t sit well with some fans. But despite its flaws, it’s ambitious as hell and you have to respect her for that. At this point in her career, she could easily tour as a greatest hits package and make millions. Instead, she challenges not only herself but the audience with a show that’s new, unique, and aims to have a message. That’s where this tour really shines. There are a few hiccups, but you can’t fault her for keeping things fresh instead of relying on her legacy. As she stated herself during the show, artists are meant to disturb the peace and that is something Madonna excels at.