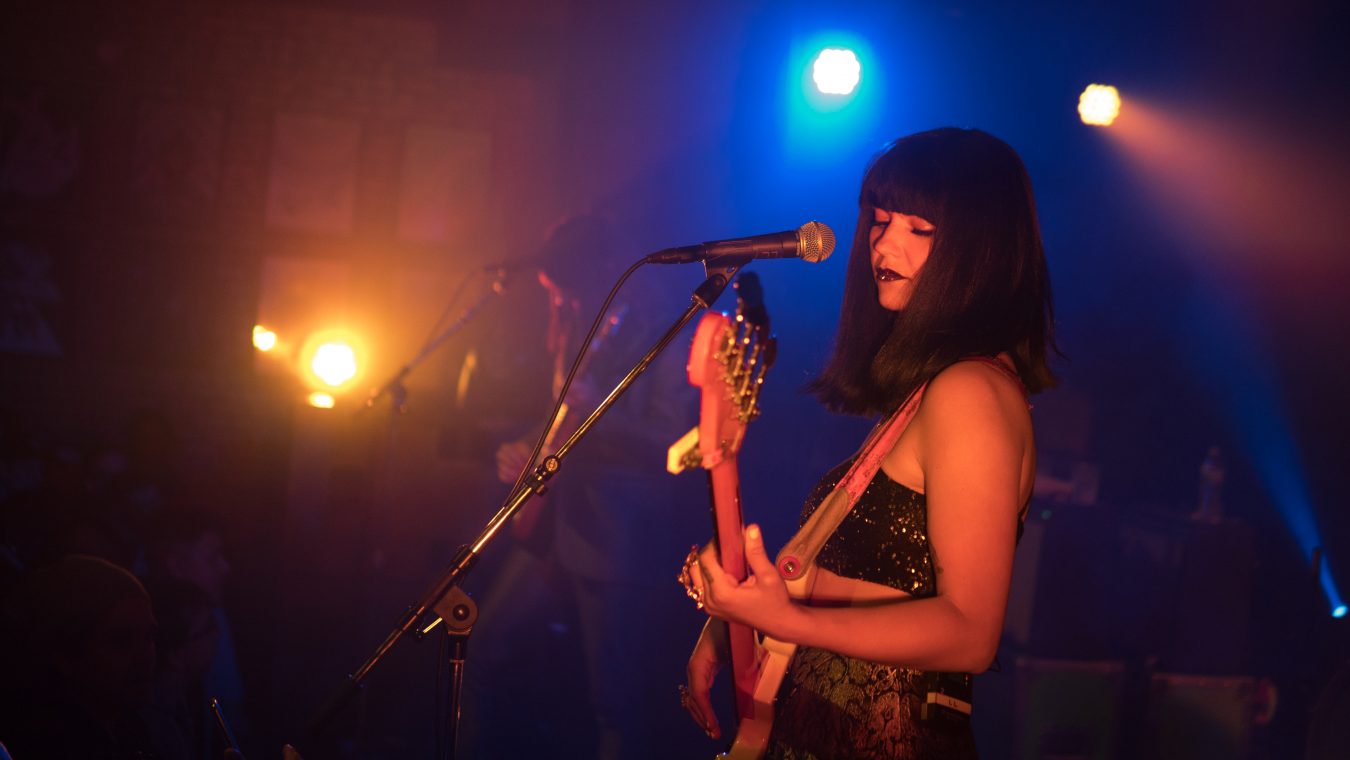 A night with minimum vocals brought maximum impact with The Mattson 2 and Khruangbin’s first of two sold out nights at Lincoln Hall.  Identical twin brothers Jared and Jonathan Mattson started the night off with an impressive set.  As the only two performers onstage, they showcased their obvious talents with Jared on the double neck guitar and bass and a Jonathan on jazzy, tribal drums.  Jared’s hands moved so quickly between the bass and drums necks and even between frets that it was hard to keep my eyes open long enough to match how low my jaw hung with amazement.  Over the past year, these two have played more than a handful of Chicago shows–all of which I sadly missed.  As my first time seeing them, it definitely won’t be my last.  With collaborations with BadBadNotGood and Toro Y Moi, the San Diego-based duo are not only making jazz cool and modern, but also bringing some retro world music to the forefront with covers of 1970’s and 1980’s Japanese music from Ryuichi Sakamoto and Akiko Yano.

First and foremost, this band’s name is not as hard to pronounce as it looks like it should be.  Pronounced “Kroongbin,” the band played a solid set that was equal parts stylish, worldly, and understatedly cool.  The vocal minimalists made  great use of whispers, and the few words they sprinkled into their funk and soul-based tunes.  With a melting pot of influences ranging from 1960’s and 1970’s Southeast Asian pop and rock, funk, Indian, Middle Eastern, psychedelia, and classic R&B, the resulting combination could be unapproachable or amazing.  The Texan trio has pulled off the latter, artfully blending all these influences into a sound that is delightfully eclectic and so hard to pigeon-hole that it encompasses a one-size-fits-all approach for listening occasions.

Khruangbin’s on-stage presence is a fun representation of this collection of disparate parts that work together to create a universally appealing experience.  Bassist Laura Lee caught glimmers of light in a sequined cropped bralette and matching dark glittery lips.  Although it was hard to see drummer Donald “DJ” Johnson in the dimly-lit background, I could hear the impeccable rhythm he kept as fellow band mate Mark Speero described him as “the chillest drummer ever.”  Speero was as eye-catching as Lee with their matching his and hers “Khruang-bangs.”  The guitarist was not only incredibly talented, but also amusingly engaging.  He made a point to direct his playful eye contact through his curtain of bangs at pretty much everyone in the audience.  To top off a night filled with influences spanning decades and international lines, the band also included a medley of 90’s hip hop jams including Dr. Dre’s “Next Episode,” Ice Cube’s “It Was a Good Day,” ODB’s “Got Your Money,” and ATCQ’s Electric Relaxation.  The trio finished up the night with the first single off their latest album Con Todo El Mundo, concluding the journey the a world of genres.