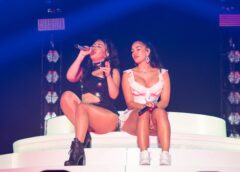 Kali Uchis and Jorja Smith on their co-headlining tour made its way to Chicago. The Aragon Ballroom played host to the sold out show. Walking into the venue you could feel the intensity to witness both of these artists take stage.

Jorja Smith with a full band to accompany her soulful voice started with Teenage Fantasy. She moved across the stage with grace making eye contact with her fans as they sang along. Jorja also performed songs such as Where Did I Go, On Your Own, Blue Lights and ended with On My Mind.

Kali Uchis standing on a spinning circular platform while making her entrance. As the lights turn up, her sultry ballad Loaner began to play. Her vocals combined with her ability to dance had concertgoers cheering for more. Throughout her performance she was in sync with making movements to every beat her band provided. Kali went through her catalog performing Just A Stranger, Gone Before Sunrise and After The Storm just to name a few. The intensity was high and Kali brought out Jorja Smith to perform Tyrant. It is safe to say seeing both of them perform live together is an experience you will never forget.