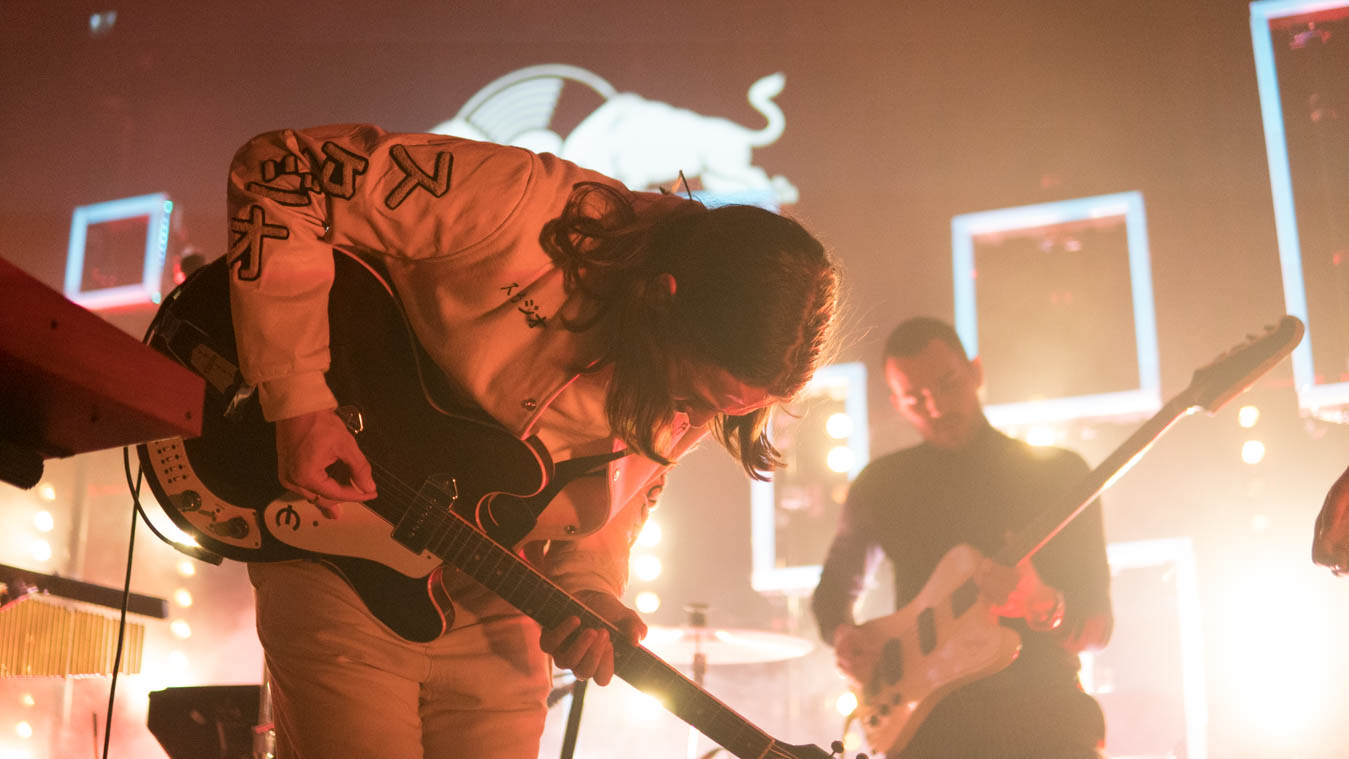 In line with the headliner’s name, the venue’s entrance way was decked out in plants, and colorful cartoon owls.  Their cocktail menu even included Jungle Juice, which was served in a series of tiki glasses towards the beginning of the night.

Local experimental twosome Drama Duo started the night off with their special brand of happy sad music. With their singer Via Rosa and producer Na’el Shehade. While there was not very much happening in terms of on-stage movement, Via Rosa’s silky smooth vocals lured the audience in like flies to honey. Unfortunately there wasn’t much keeping me standing in one place throughout their set. About midway through their set, she turned her light up headband on and unveiled her bra and pink tutu. I wish it had been a more lively performance, but this show wouldn’t stop me from listening to their music.

Typically a solo recording artist, NoMBe took to the stage accompanied by a rocking all-female band. His unique brand of chill electronic hippie rock made for an interesting transition set for the evening. While NoMBe (née Noah McBeth) held his own on-stage as a charismatic performer, his touring band was equally as entertaining, engaging the audience with hair whips and lingering eye contact. He and his band appeared to enjoy themselves on stage traversing the stage and engaging with different sections of the audience. At one point, McBeth sprawled out on his back on stage as a swarm of photographers clamored around, hoping to snap a fun angle.  With a smooth, mid-tempo sound similar to the other acts on the bill, this set reminded me more of a classic rock band in terms of confidence, connection, and on-stage antics.

Jungle (noun): an area of land overgrown with dense forest and tangled vegetation, typically in the tropics.

Recorded by duo J and T (Josh Lloyd-Watson and Tom McFarland), the British 1970’s-inspired outfit plays as a seven-piece band.  The entire live crew–decked out in black and white mostly monochromatic outfits– barely fit on-stage with all their instruments.  At center stage were founding members J and T with a mountain of keys and production equipment, flanked by accompanying vocalists/handheld percussionists Andro Cowperthwait and Rudi Salmon.  Towards the back of the stage, were Fraser MacColl (bass), George Day (bongos, other percussion), and Dominic Whalley (drums).

With all the different things happening on-stage at once, one thing was clear: these guys love performing.  The entire live band not only looked happy to be there, but also happy to be with each other, playing off of each other well and making this set a joy to photograph.  As a slightly later set on the Monday night following a long weekend, it was a bit of a schlep to get there and maintain high enough energy to enjoy the concert, but Jungle made it all worthwhile.  The set off a smooth dance party, sending the crowd into a blissful groove as they worked the energy into their final songs, ending with clap-heavy “Busy Earnin'” and  “Time.”  This was my favorite set of Red Bull Sound Select’s month-long run in Chicago and one of my best-spent Monday nights.  With their low-key grooves and high, but not turnt-up energy, this also made for one of the most pleasant crowds in the entire month.