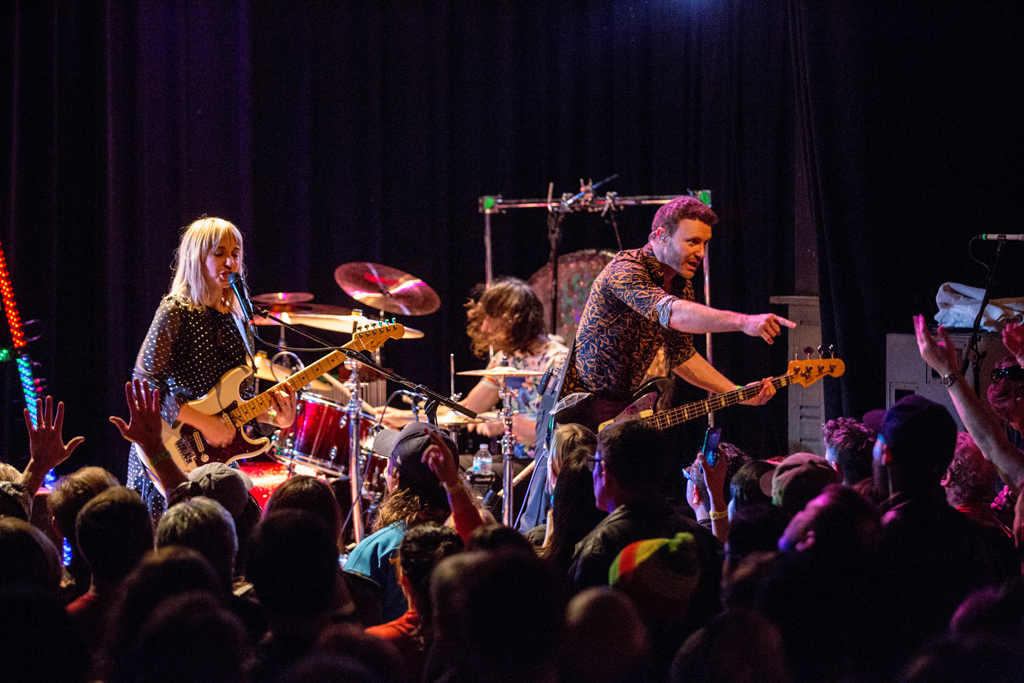 The Joy Formidable made their way back to Chicago with a fun and energetic night that began with Tancred kicking off the night with a solid set.

Tancred is the stage name of Jess Abbott, formerly the guitarist of the indie rock band Now Now. She and her touring band fit in perfect to set the tone of the evening. With 4 albums under her belt, Jess has a plethora of songs to choose from and her set was fantastic. Listening to her perform live, the music is very reminiscent of great 90’s acts like Belly and Veruca Salt.

Throughout Tancred’s set fans were grooving and dancing to every track.  The stand out songs of her set were “Bed Case”, “Queen of New York”, “Something Else”, and “Pretty Girls”. Jess Abbott has a ton of talent and hopefully you’ll see a lot more touring by her in support of other tours to build a bigger fan base. Tancred is definitely worth checking out.  With a combo of both infectious lyrical and instrumental hooks, Tancred is a great act to become quite familiar with.

The last time The Joy Formidable rolled through Chicago, they brought a very different format to fans in the form of an acoustic campfire show. While it was a big hit with everyone at the show, fans were excited to see them back with their heavy rock sounds this go around.

Ritzy, Matt, and Rhydian came out swinging with the guitar heavy “This Ladder is Ours”. Their set was filled with many of their big hits, but they also gave fans a chance to hear tracks from the new album ‘Aarth’. All 4 of the new tracks were met with nothing but praise by the crowd. “Y Bluen Eira” was the song that captivated the crowd the most from the new album. “The Wrong Side” also from the new album has a lot of depth to it and is a departure from their earlier work, but a testiment to the band in how they can move away from what made them big and show fans the creativity they have.

The Joy Formidable were more than happy to be back in Chicago and kick back with the crowd throughout the set.  The love the band has for its fans is something to behold as they reminisce about the happenings of previous shows and remember multiple fans by name. They even took time to goof off at multiple times throughout the show including playing a little game with the crowd that got a bit out of hand.

The trio finished the night off with their biggest hit “Whirring”.  It is the only way they could have ended that night. The band will be back again and if you have missed the countless times that they have graced a stage here in Chicago, make it a point to see them when they come back.

In fact just go see both acts as in you will not be disappointed.