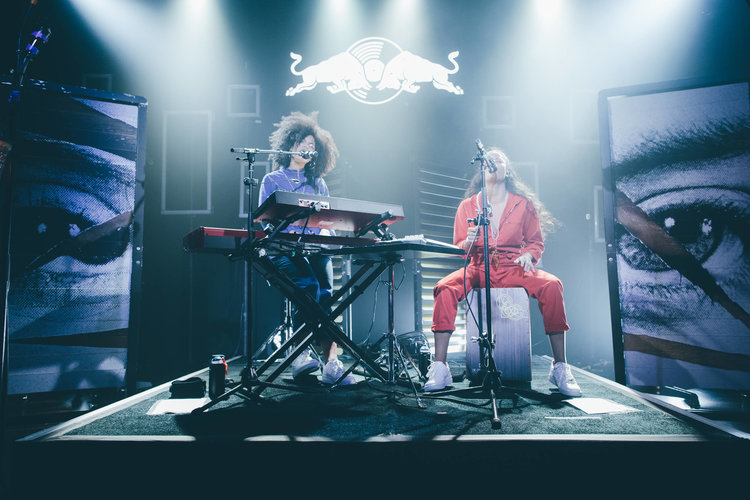 Koda opened up the night.  The tiny guy with a bigger voice hit his high notes, while his bassist and guitar player seemed to enjoy themselves while keeping a low profile throughout the set.  The singer/guitarist had two mics, one for his unaltered singing voice and another for a more distorted voice.

Chicago local theMIND kept a pretty interactive set, starting with shoutouts for people who knew him and those who don’t, whom he affectionately referred to as his “new friends.”  He kept trying to get the crowd involved, encouraging them to join in until  people started singing louder than those talking over the set.

Paris-based twin sisters Ibeyi closed the night closed the night with a series of what looked like they could be an intricate display of paneled lights. The panels, which rolled around on wheels were purposefully placed to frame the twins onstage. One twin, dressed in a bright red jumpsuit, played a serious of electronic percussion instruments while alternating or harmonizing vocally. The other twin, in a primary blue jumpsuit and sparkly silver eye shadow, tools mostly to keys and lead vocals. The set was inspiring and empowering, with highlights including “No Man is Big Enough For My Arms” featuring clips of a Michelle Obama speech and “Deathless,” a track about standing strong in the face of adversity. Towards the end of their set, the purpose of the rolling panels became clear revealing a disjointed depiction of their album cover as the backdrop of the stage. They ended their set with the Metro erupting into a sea of stomping and vocals, finishing up with “River.”