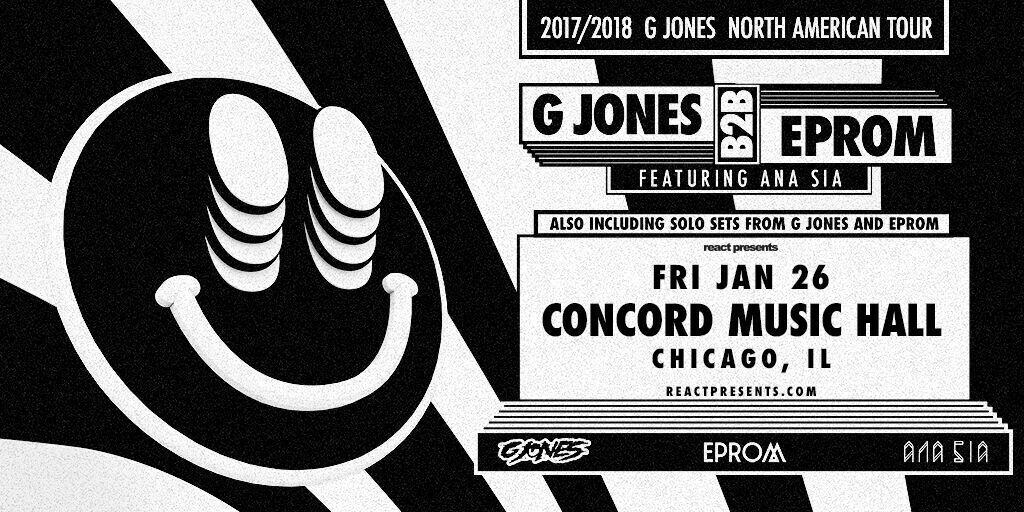 After being on tour during their second round of dates around North America, the two beat makers sounded cleaner than ever before. A cohesive and unrelenting set, the second round for Chicago was flawless. The chemistry built between both G Jones and Eprom was apparent and welcomed.

Eprom:
Eprom took the stage at 10:30 to a packed Chicago crowd. Immediately hitting Concord with bass, that quite literally shook the floors. Every direction you looked had hair flying and bodies moving. With just enough boogie room that everyone was comfortable, the entire crowd couldn’t stand still. A unique set from his first visit to Chicago, I can gladly say I didn’t recognize most of the tracks. Always awesome to have each set be different than the last when catching an artist on two dates during a tour. Heavy-hitting and a joy to catch live, Eprom killed another massive set.

G Jones:
Acclaimed Bassnectar collaborator, the Bass Head community was strong in the crowd for G Jones. As his signature “G Jones Eye” laptops were set up, the crowd began to cheer. For nearly two-hours G Jones shook the crowd in Concord down to their bones. Starting off proper with Mind Tricks, the atmosphere was set. What can only be described as monstrous, G Jones delivered a full hour of music before being joined by Eprom. The back to back that followed was exactly what the crowd craved. Dropping F*ck What You Heard, Pineapple, Mystery Spot, Helix, six new unreleased tracks and so much more – the set was out of this world.

The tour will continue for a few more dates before concluding in Aspen, Colorado on February 24th. If you have a chance to catch these two live, definitely make the journey, you won’t regret it.