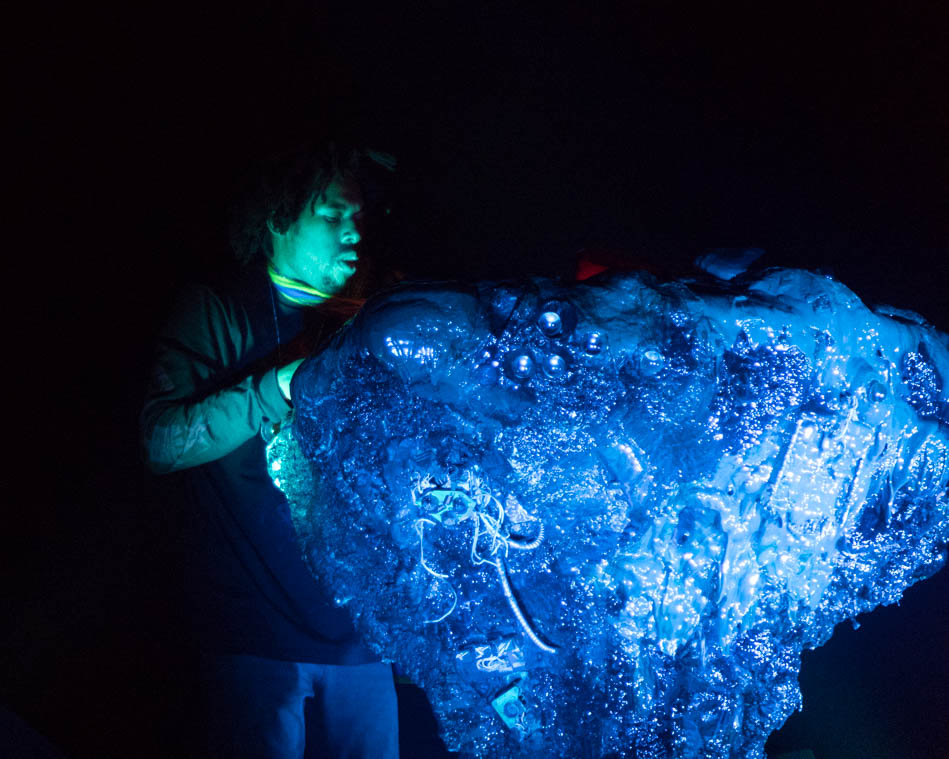 With the promise of Flying Lotus’ iconic and eye-opening visual displays presented in a 3D format, fans arrived early. The beauty of The Riviera Theatre only added to the anticipation of the show to come.

Having originally been only added as five-minute feature during PBDY’s set, So So Topic was added as direct support. Impressing the team so much the young MC had been given the opportunity of a lifetime. Living up to expectation, So So Topic delivered an emotional 45minutes. Carefully selecting both emotional undertones and uplifting vibes, So So Topic was a phenomenal way to kick off the night.

Taking the stage for a 30minute set was the Los Angeles performer, Paul Preston. Releasing mixes on SoundCloud entitled The Monolith series, PBDY has “…sounds that inspire change; soundscapes for creation & destruction…”. His 30min set was exactly that, a unique mash-up of sounds that you couldn’t really figure out. PBDY hands down delivered one of the most interesting sets in recent memory.

The lights dimmed and the crowd donned their 3D glasses, the room filled with smoke as the night began.  FlyLo took to the stage, immersing the crowd with Getting There off of Until The Quiet Comes. As the 3D visual’s emerged, the crowd filled the room with cheers. The newly enhanced visuals of Flying Lotus had the crowd in awe.

With tendrils reaching into the crowd, space ships entering the stands and fractals pulling viewers in; everyone was in a trance. Conducting an orchestra of hip-hop, jazz, bass music stylings and sultry vocals, Flying Lotus was a mad scientist on stage. Diving into his Captain Murphy personae and playing his Kendrick produced tracks he kept viewers on their toes.

Also featuring iconic You’re Dead! visuals, nothing was left out for die-hard fans. Showing love for Chicago, Flying Lotus played a Chance the Rapper track and shouted out his appreciation of the city. Exiting the stage, the crowd pleaded for an encore. After a few minutes, as fans began to exit Flying Lotus took to the stage to perform another Captain Murphy track. Ending with Zodiac Sh**t, he thanked the crowd again and let everyone know he’d see Chicago next year.