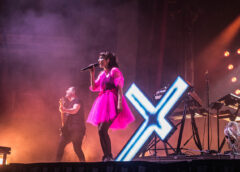 CHVRCHES made it back to Chicago with one of their best performances to date. In support of their most recent album ‘Love Is Dead’ they mixed evenly over their 3 albums some of their biggest hits along with a nice selection of tracks from the new album. Lauren, Iain and Martin gave fans one hell of a show at The Aragon Ballroom and the crowd responded with pure delight. They have come a long way from when I first covered them at The Metro back in 2015 and they have grown into an amazing band along the way. The touring is definitely not slowing them down and they were having a ball on stage, giving the sold out crowd an upbeat and beautiful show.

From my vantage point after photographing them, I had a view of the entire floor and it didn’t matter where fans were in relation to the stage. From the front to the back fans were dancing and singing their hearts out throughout the show. Something that you don’t see often at shows. It was one massive party that could have gone on all night.

This band has so much potential to become even bigger and give fans a much longer and more diverse show in the years ahead. The talent that each of them bring to this group is what makes them so much fun to see live. The future is looking bright for CHVRCHES.

Be sure to check out their most recent album and be on the look out for their next list of tour dates as I’m sure they’ll be back to Chicago soon enough. Also check out the photo gallery below the setlist from the show.