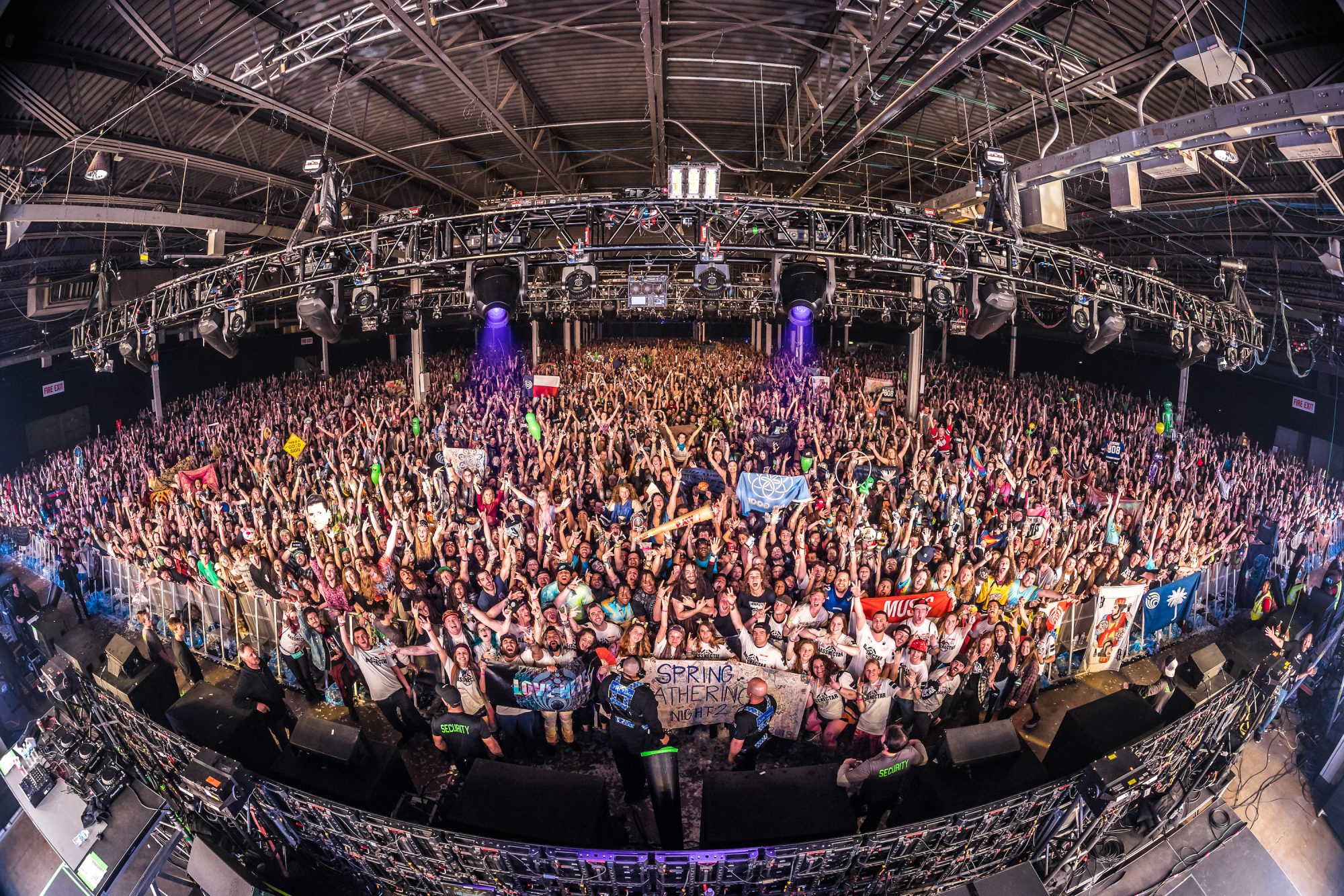 If you have ever heard the name Bassnectar, or known someone who has attended one or many of his shows, you know they are one of a kind. Each set unique and catered to the audience he is performing for. With a notorious family of “Bassheads” traveling across the country to see him, some even relate the fan-base to The Grateful Dead touring years. Amongst the crowd you can find people excited for their first show and right next to them, someone excited for their 30th show. As Spring Gathering descended upon the city of Chicago, it was a no holds barred bass music showdown.

Approaching the venue, the iconic bass-drop logo could be seen on the coats, shirts, pins, hats and tattoo’s of the attendants. Everyone in line discussing what they hope Lorin (Bassnectar) would play and guessing what he would open with. A special part about seeing Bassnectar is the “song-chasing” element of his live sets. Sometimes going multiple years without playing iconic songs, a part of the culture he has built is the element of surprise for when and where he will play specific songs. Even after 18 sets, I am personally chasing Immigradiada off his Divergent Spectrum album.

Each night had Bassnectar slated for a 2-hour set, and as he took the stage at 10pm, the crowd erupted. As he fed in his track “Blast Off” from his Timestretch album, the 15,000 in attendance turned into one huge pit of hair flying and head-banging. The first time he had played the track since 2015, he was letting Chicago know he was out for blood right from the start. A 2-hour set is hard to run through, but the important element of a Bassnectar set is the intricate weaving of both heavy bass music and ambient drops throughout the 2-Hour marathon. Below is the full set for Night-One of Bassnectar Spring Gathering 2018.

Night-Two began in similar fashion, and especially after the first night the crowd was anxious to see what Lorin would be playing. He started off with a bang right at the beginning with his beautiful and highly anticipated “Run the Heart (Bassnectar Remix) into Colorstorm. Bringing forth an even heavier and more nostalgic set than the previous night, it felt as though it was 2013 again and I was catching Bassnectar on a Spring Tour date. This was the closest thing to catching “the old Bassnectar” that I believe I might ever be able to experience. The second evening had everything you could want and need from a Bassnectar set; even a Duncan Trussle speech about Spring that brought fans to tears. A euphoric experience, if you have not had the chance to catch Bassnectar perform live yet, I strongly urge you to catch the next set closest to you. Below is the full set for Night Two of Spring Gathering 2018.