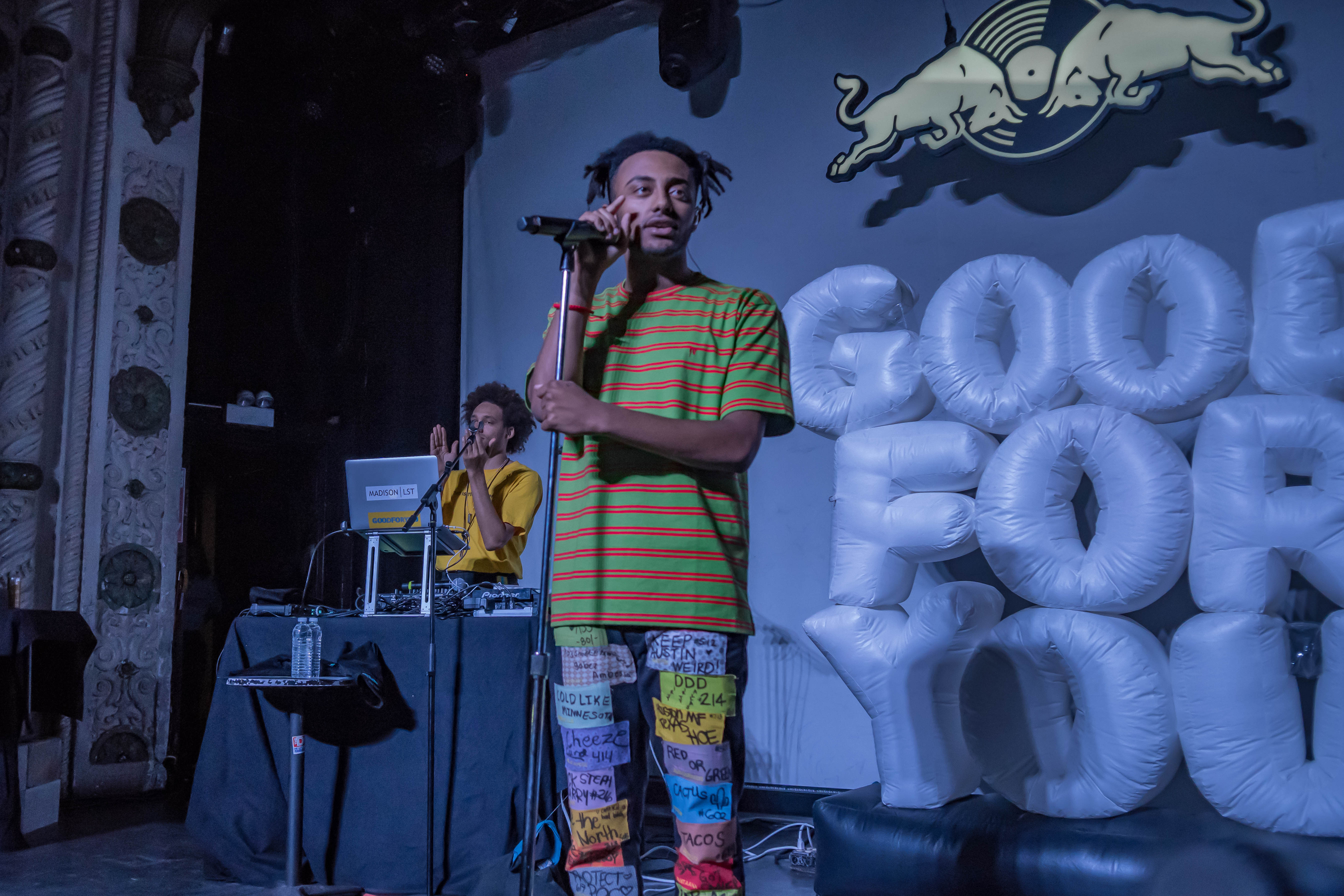 New Orleans rapper, singer, writer, and producer Pell performed an exciting set as the supporting act for the night.  Just off the heels of his latest single “Chirpin’,” Pell got the crowd going, starting cheers of “Pell Yeah,” He won the crowd early on with a short, albeit powerful set.  Joined only by his drummer for the majority of his set, Pell’s stage presence was full of classic confidence–the kind you would find from early 90’s rappers commanding attention by fully owning the stage and fostering connection. Even with folks who weren’t familiar with his music, he involved the crowd in call and response to get them hyped on his upbeat track “Queso.”  Pell also pulled off what I’ve been waiting for with these hometown Chicago shows and brought out hometown favorite Saba to join him onstage for a new song off of Pell’s upcoming EP girasoul.  He finished strong with “Got It Like That,” before exiting the stage asking the crowd where to find him on social media, to which the crowd shouted out, “Pell yeah!”

Starting his set off on a positive note, Portland-based rapper Aminé buttered the crowd up early on.  He exclaimed, “I like making everyone feel confident, so when I say you’re beautiful, you say ‘I know.'”  The crowd eagerly responded throughout the night, each time getting louder and more confident. His band, outfitted in matching ADIDAS track pants and Aminé  “Tour for You” tees, matched the giant blow-up “Good For You” balloon serving as his backdrop. Throughout his set, the playful rapper threw in some throwbacks with a portion of TLC’s “No Scrubs” and an energetic rendition of “Wannabe” before transitioning into his very own “Spice Girl.”

Aminé’s colorful tour pants donned a patch from each city on his tour, with a different saying scribbled by a lucky audience member.  For this last date on this leg of tour, he picked “the tallest motherf*cker” out there, clarifying that he isn’t short, but the guy joining him onstage is just really tall.  The crowd chose to pen “Obama Forever” on the Chicago patch.  He ended his set with “Caroline” backing up to run through it twice before ending with telling the crowd once again, “you’re beautiful.”  To say this was one of the most delightful sets from this batch of Red Bull shows would be an understatement.  Aminé’s set was not only an awesome musical performance, but it was also the most hilarious set I’ve seen all month.  This is the kind of talent that will carry over well to much larger venues, and I’m really excited to see where time takes this talented performer.